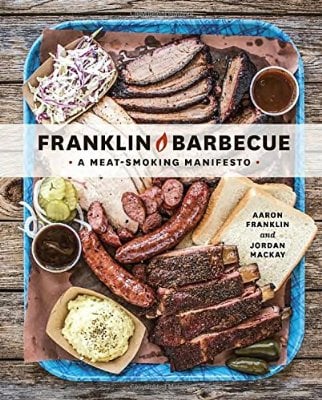 This year’s wave of Spring cookbooks is a little disappointing. Spring is when the grilling cookbooks come out, and I usually have a hard time narrowing my list down to five that I really want. This year? I found five…and after that, not much is out there that grabs my attention. There is a distinct “Texas and the American West” theme in this year’s cookbooks; I think the world of American food is waking up to just how fantastic Texas barbecue is, led by (James Beard award winning) Aaron Franklin and his first cookbook…

I was late. I got to the end of the line at Franklin Barbecue, and found a guy holding a “Last Person Standing” sign. I was warned that meant they might be out of barbecue by the time I got to the store. Luckily, a few people ahead of me gave up on the line; an hour and a half later, I was sitting down to fantastic brisket and sausage, some of the best I’ve ever had. I’m saving this book for my summer vacation - the reviews say it’s not a recipe cookbook, but a meditation on live fire barbecue. I can’t wait to dig in.

No professional chef has influenced my home cooking more than Mr. Bayless. My kids love Taco Night thanks to Mr. Bayless’s previous “home cook” oriented cookbooks, Salsas that Cook and the original Mexican Everyday. These are not elaborate or professional recipes; these are the recipes that a Mexican home cook would make on a busy Tuesday - so they’re perfect for an American home cook, like me.

A pair of barbecue seasoning books by authors I trust - Jamison and Jamison, and Dr. BBQ.

Speaking of barbecue authors I trust, Fertig and Adler wrote some of my favorite cookbooks over the years - particularly Fish and Shellfish, Grilled & Smoked - so I’m looking forward to their take on French on the grill.

A Taste of Cowboy: Ranch Recipes and Tales from the Trail by Kent Rollins

I’ve enjoyed reading about Kent Rollins and his chuck wagon cooking, so his first cookbook is definitely on the list.

Other cookbooks you’re looking forward to? Leave them in the comments section below.