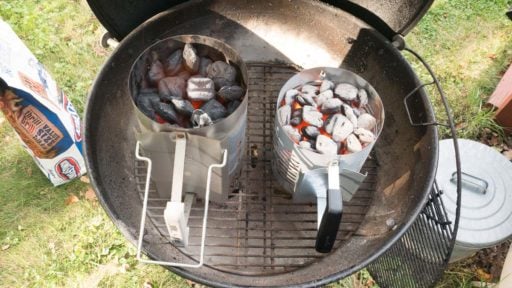 My go-to charcoal chimney has always been the Weber Rapidfire Charcoal Chimney – it works better and holds more charcoal than any other chimney…until now.

This year, Char-Broil released the Char-Broil Half-Time Charcoal Starter, with a new, wider design with a lot more holes for airflow. I compared the two head-to-head, and…the results were inconclusive. The Char-Broil was definitely faster – it was ready in 22 minutes, vs 31 minutes for the Weber – but it also holds less charcoal. (The Char-Broil is wider than the Weber, and shorter. The result is the Weber holds about a quart more charcoal.)

After taking these pictures, I realized my test was invalid. I need to re-test, filling both chimneys with the maximum amount of charcoal the Char-Broil can hold in both chimneys. In other words…more news to come.