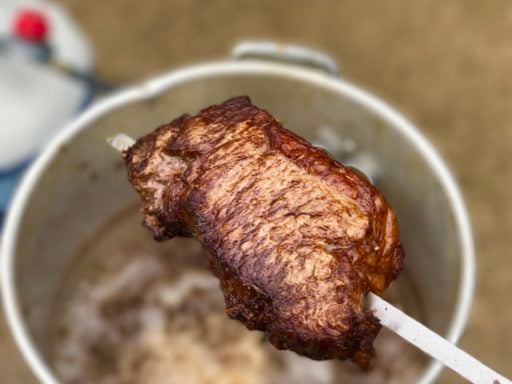 Outlined against a blue-gray October sky, we started our annual tailgate. (Apologies to Grantland Rice.) Unfortunately, that blue-gray sky? That was the rainstorm moving in off of the lake. We eventually gave in, and re-located to my brother’s house, where we tried out Pitchfork Steaks in a turkey fryer. (Think fondue…but with an entire steak instead of a tiny beef cube.)

Now, mistakes were made. We didn’t realize that the turkey fryer had shut itself off – there’s a “helpful” auto-saftey feature that cuts off the gas after a half an hour, which you have to manually reset. So, the steaks went into 275°F oil instead of the 350°F we needed, and didn’t brown quite as much as we wanted on the outside.

Even worse…well, first, I have to say this is not another pitch for Thermoworks thermometers. At least not on purpose? You’ll understand in a minute. 1Usual disclaimer: I’m a ThermoWorks affiliate, and get a small commission to support DadCooksDinner if you buy something from them through one of my links. Though, after today’s story, we’ll see if they will still have me as an affiliate…

See how the picture below is a little blurry? 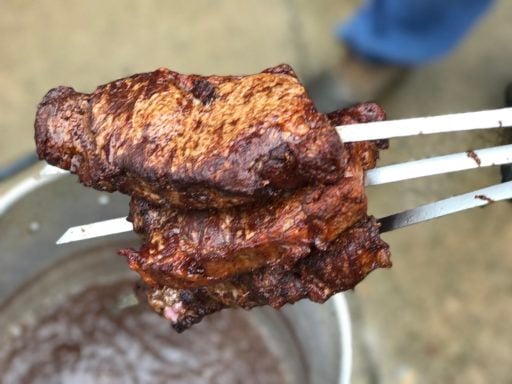 I am holding the skewers of steak with one hand, taking a picture with my camera phone with the other hand, and holding my brother’s ThermoPop between my teeth. (I checked the internal temp on the steaks, and they are ready to serve…but the table is too far away to put down the thermometer.) The picture is blurry because the phone slipped a little – and I jerked my hand back to avoid dropping my phone in the boiling oil. Unfortunately, that made me lose my grip on the ThermoPop – and it bounced off the edge of the pot and plopped right into the boiling oil.

Whoops. Looks like I owe my brother a new ThermoPop.

I put the steaks down, ran back with a pair of tongs, and fished out the ThermoPop. It was in the oil for ten seconds, I’d guess, at roughly 300°F. We tossed the ThermoPop onto the grass to let it cool off, and I was surprised to see it was still working, even after turning on and off a few times. Those little ThermoPops are tough!

(Don’t try this at home, please – while ThermoPops are sealed and “splash-proof”, they are not boiling-oil-proof – at least not by design.)