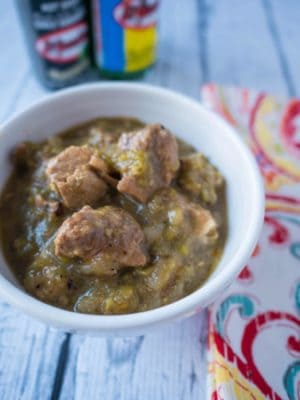 Is this chili? I mean…it isn’t red.

Meat simmered in a chile based sauce? Of course it’s chili. It is just…different.4Come at me, chili purists.

Chili Verde, or Green pork chili, is a staple of the Southwest. Once you leave Texas and its dried ancho based chiles, you get into long green chili territory. The most famous long green is the Hatch chili of New Mexico, which is the start of Chili Verde territory, but Chili Verde stretches north to Colorado, and west through Arizona and in to California. 5Of course, it also stretches down into Mexico. Salsa Verde, the green sauce we simmer the pork in, came from the Frontera of Northern Mexico and Southwestern America. The Frontera region has always been a porous border, with lots of food ideas crossing the border, mixing, and heading back the other way.

I’m sharing two different versions of the Salsa Verde recipe – one is the real deal, with home-roasted chiles. If I can get New Mexico or Anaheim long green chiles (and fresh tomatillos), I use them – the results are fantastic.

At least, that’s what I do in the summer. For all my talk of the Southwest, I only get to visit; I live in Ohio. In the winter, long green chiles are hard to come by – and ridiculously expensive when you can find them. That’s when I have to improvise, and canned green chiles and jarred tomato salsa have to be good enough for my Salsa Verde. 6While I dream of the hot, dry Southwest during a February snowstorm.

Why brown only one side of the pork? I find it the best compromise between flavor and speed. Browning one side of the pork gives me the browned bits on the bottom of the pan that build flavor in a chili; browning only one side means I don’t spend forever browning pork.br][br]Like beans in chili? Serve with [Pressure Cooker Pinto Beans and stir in as much as you want. (In the Southwest, beans are a condiment, added in as needed.)