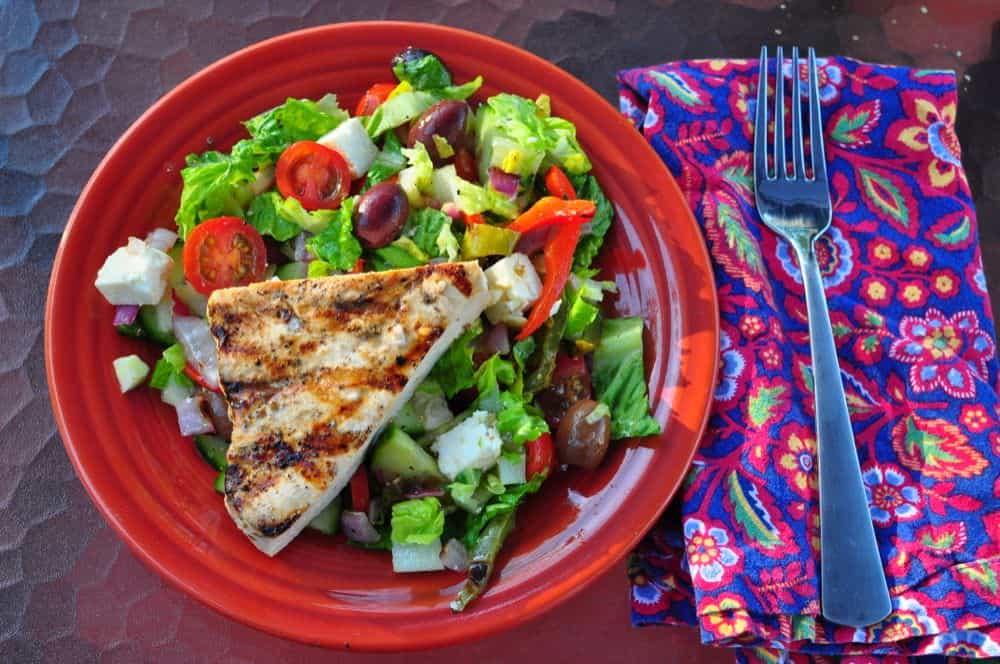 Swordfish is great for grilling. It is a very firm-fleshed fish, and holds together where other fish flake apart. If you are just starting out with grilling fish, try swordfish.

Swordfish may be easy to grill, but it is very mild-tasting. I marinate swordfish in olive oil with lemon, oregano, and a pinch of sugar. This gives it a crunchy browned crust on the grill. Then I serve it with a Greek salad full of olives, feta cheese, and grilled peppers and onions. The result is a balance of opposites—mild, meaty swordfish meets crunchy, bold salad.

Now, if you've been around for a while (like me), you might be thinking: Swordfish? Isn't it endangered? What happened to "Give swordfish a break?"

Your memory isn't failing you. Swordfish was in trouble back in the '90s, and there was a campaign to save it. Thanks to good fisheries management, North Atlantic swordfish had fully recovered by 2009. Buy swordfish that was caught in North American waters and give your conscience a break—our swordfish is sustainable, and will be around for a very long time.

1. Marinate the swordfish, prepare the peppers and onions
Season the swordfish steaks with the salt and pepper. Mix the olive oil, lemon juice, zest, oregano, and sugar in a zip top bag. Add the swordfish to the bag and massage the marinade onto the fish through the plastic. Squeeze the air out of the bag, seal it, and store in the refrigerator for 30 minutes to 1 hour, turning occasionally. Season the peppers and onions with the salt, and let rest at room temperature until it is time to grill.

2. Set up the grill
Preheat the grill, brush the grate clean, then set up a two-level fire—half the grill on medium-high for the swordfish, the other half on medium-low for the peppers.

3. Prepare the salad
While the grill pre-heats, get the salad ready. In a small bowl, whisk the lemon juice, zest, red wine vinegar, salt, pepper, sugar, garlic, thyme, and olive oil to make a vinaigrette. Add the cucumber to the vinaigrette and toss to coat. Let the cucumber marinate in the vinaigrette until it is time to toss the salad.

Put the romaine in a large bowl, then top with the tomatoes, feta, and olives. Don't toss the salad yet—set it aside and let it wait. 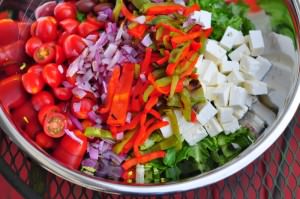 4. Grill the swordfish, peppers and onions
Remove the swordfish from the marinade, let any excess drip off, and put the fish on the medium-high heat side of the grill. Put the peppers and onions on the medium-low heat side of the grill. On a gas grill, cook with the lid closed as much as possible; on charcoal, leave the lid open.

Cook the fish for six to eight minutes, flipping after four minutes. The swordfish is done when it reaches an internal temperature of 130 degrees F. (If you don't have an instant-read thermometer, cut into the fish to check—it is done when cooked most of the way through, but still slightly translucent in the middle. Residual heat will cook the fish through while it rests.) 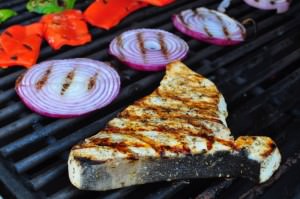 This post is part of the BlogHer Light & Fresh Summer Grilling series, which includes 100 percent editorial content presented by a participating sponsor. Our advertisers do not produce editorial content. This post is made possible by Michelob ULTRA Light Cider and BlogHer.