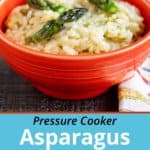 Pressure cooker asparagus risotto is my first attempt to recreate some of the glorious food I had in Italy. (Did I mention I went to Italy?)

La Serenissima, the Serene Republic of the Venetian Empire, lasted for over a thousand years. The Venetian Empire was fueled by trade, their navy’s control over the Mediterranean, and the Veneto, their inland breadbasket.

Or should I say…rice basket? Venetians filled up on risotto, not pasta.1 The Veneto is a broad plain, perfect for rice paddies, stretching from the Po river to the Dolomite mountains. We visited the rice mill at Riseria Ferron, just south of Verona. There we learned all about the local Vialone Nano rice…by eating a fantastic lunch.2

We only make asparagus risotto for about ten days a year - when asparagus is at the height of its season.

Quote from the Sous Chef at Ristorante Pila Vecia

Each course centered around a different type of rice dish. The asparagus risotto, though - that one grabbed me. It was loaded with fresh asparagus and tasted like Spring. It made me think of the first flash of green at the farmers market after a winter of root vegetables.

We got to talk to the sous chef, and he gave us a quick overview of how they make the dish. Now, I’m not going to make asparagus cream - that’s too much, even for me - but the rest of the instructions were easy for a home cook to follow. Simmer the rice in vegetable broth, stir in a lot of butter (and, optionally, grated cheese). Put par-cooked asparagus tips in with the rice, cover, and let them steam through.

I loved Italy - I did not want to leave - but I was itching to get home and try this recipe before asparagus season ended. Pressure cooker risotto is one of my secret recipes.3 Risotto in the pressure cooker does not need the repeated stirring of traditional risotto. Pressure replaces the stirring, releasing the starch from the rice, resulting in a creamy, delicious risotto. Add some asparagus, and...fantastico!

Arborio rice is my default for risottos, because it is the easiest one to find at my local grocery stores. I prefer Carnaroli rice for pressure cooker risotto, when I can find it. All that said, Vialone Nano rice is what I used, because it's the rice grown at Riseria Ferron.

If you use store-bought broth, watch out for “regular” vegetable broth – it’s loaded with salt. If you can’t find low-sodium chicken broth, use water.

But, please, try homemade vegetable broth. If you have an Instant Pot, you will love it.

You can use homemade chicken broth if you have it, but I like the lighter taste of vegetable broth with the asparagus in this risotto.

Grated parmesan is a good (if more expensive) substitute for the pecorino Romano. Or, skip the cheese. My kids are picky about cheese in their rice - it's a very particular concern, I know - so I'll often leave it out of risotto.

According to the USDA, Leftover risotto is good for up to three days in the refrigerator, or three months in the freezer, as long as it is refrigerated (or frozen) within an hour of cooking. (I portion out my rice in 2-cup containers before I put it in the fridge or freezer.) Also, be sure to reheat the rice all the way through - to be precise, an instant read thermometer should read 165°F in the middle of the rice.