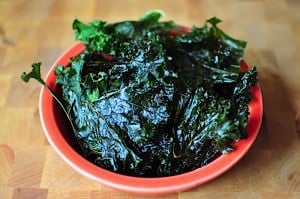 I've mentioned The real omnivore's dilemma before - what do you do with all the kale in your CSA? The last time I asked that question, I got a response from reader Maria in an email, saying: You make kale chips, of course!

Kale chips are a food blogosphere sensation - everyone has done them.
I mean everyone: Other versions are here, here, here, and here.
...and here, here and here.  I'll stop now, you get the point.

Normally, I don't know what to do with all the kale in my CSA; now I was impatient, waiting to get some.  It arrived, and finally I could try the recipe.
It just didn't seem right, after calling it the CSA box dilemma, to go buy some kale from the grocery store.

I found out why they are such a sensation - they're fiendishly addictive. They come out crispy and salty; the roasting gives them a sweet taste at first, and a little bitter bite at the end. They're so crisp that my first thought was "how am I going to store the extras? They're all going to crumble!" Then I tasted one. And another. And another. Then Diane joined in the tasting. Soon I realized I hadn't taken the "beauty shot" I needed for this blog post, and all the kale was gone. Oh, well, nothing to do but make another batch.
Yes, I know, I'm really suffering for my art over here.
**Yes, I did eat an entire bunch of kale in one sitting. And then I wanted to lick the bowl clean. I don't normally have that strong an attraction to greens.

, and the list of recipes I linked to above. 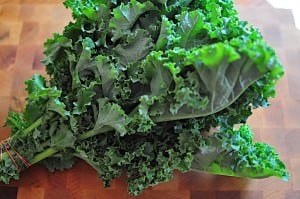 Directions:
1. Prep the Kale: Turn the oven to 300F. Trim the stems out of the kale, and cut the remaining half a leaf into 3 pieces (each piece should be 2 to 3 inches square - see pictures below). Toss the kale with the olive oil and vinegar until well coated. Spread the kale out on two baking sheets, making sure to keep it in a single layer, then sprinkle with ½ teaspoon of the salt.
*Coating the kale with the oil and vinegar is tougher than it seems - the kale's many ridges trap the oil. I had to toss the kale much longer than I usually toss a salad to get an even coating.

2. Cook the Kale: Put the baking sheets in the oven, and cook for 15 to 25 minutes.  The kale will be papery and crisp, and just starting to turn a dark olive color. Remove the baking sheets from the oven, and sprinkle with the remaining ½ teaspoon of salt. Allow the kale to cool for 15 minutes, or as long as you can restrain yourself, then serve.

Variations:
Vinegar: Use whatever vinegar you have on hand; I like the extra hit of sweet in balsamic vinegar, but sherry vinegar and white wine vinegar also worked.

No Vinegar: Skip the vinegar if you like. My favorite potato chips are salt and vinegar flavored, so I like the extra sour element the vinegar gives you. 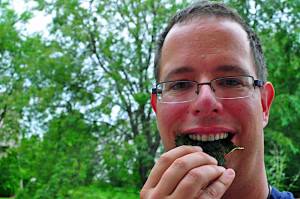 Notes:
*Don't under cook the kale; you want it shatteringly crisp. It is OK if you overcook it a little, but be careful - the longer you cook it past crisp, the more bitter the kale gets.  I like a little hint of bitter, so I go for olive color; if they turn out too bitter for you, try cooking them until they're just crisp, about 15 minutes, and see if you prefer that version.

What do you think? Questions? Other ideas for using up kale? Leave them in the comments section below.

Inspired by:
Tim Knorr, who runs the farm at Crown Point CSA, and keeps me stocked with vegetables for the summer. Thanks, Tim!