I received a bunch of complaints about this post. I was told that electric pressure cookers (and stovetop pressure cookers that aren’t dedicated pressure canners) are untested for pressure canning, and are therefore unsafe. Garlic carries botulism spores, and botulism can be deadly, so you have to be careful when dealing with canned garlic.

[UPDATE 2014-11-27] The National Center for Home Food Preservation has issued a statement warning people not to can in electric pressure cookers: Can I Can in a Multi-Cooker?
I’m retracting this post. I don’t want to take it down, so people see this warning; I’m striking the text of the recipe out. Please only pressure canners, not pressure cookers, for pressure canning. 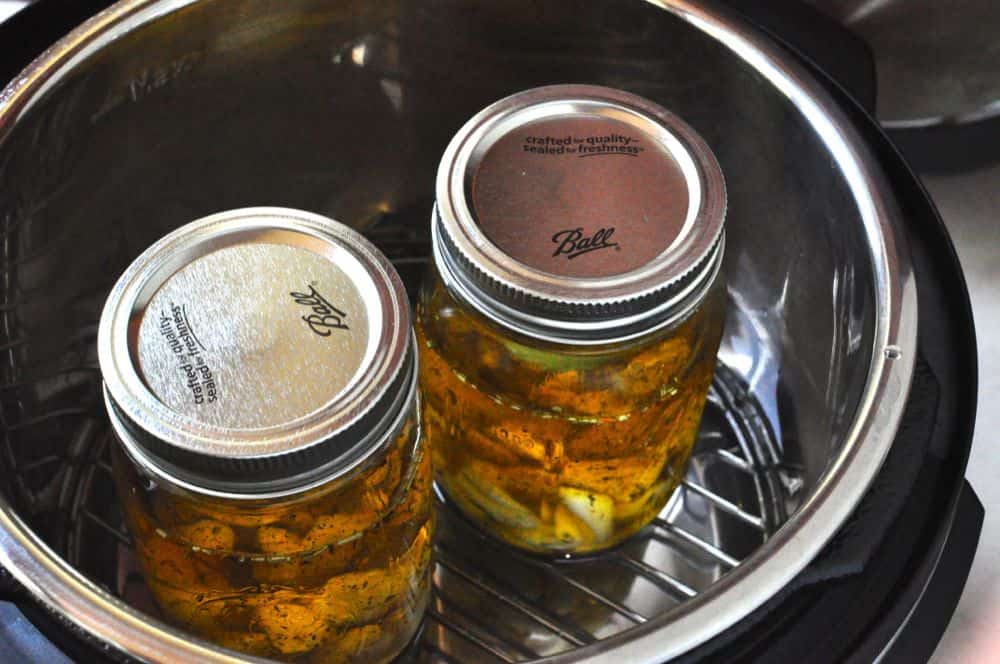 The coolest thing in Modernist Cuisine at Home

? Cooking in canning jars in the pressure cooker. They use the technique where the food would have to be stirred if it was in contact with the bottom of the pot – which can’t happen in a locked pressure cooker.
*I’ve heard of pot-in-pot cooking and pressure canning, but I never thought to do them both at the same time…

Pressure cooker garlic confit called out to me. I love the idea of a jar full of roasted garlic cloves in the refrigerator. And the garlic-infused oil is as useful as the cloves. I made braised kale using a few tablespoons of the oil and a few cloves of garlic from this recipe, and Diane was raving about it.
*See the Notes section for the kale recipe

After I got over how cool it was to see canning jars in the pressure cooker, my next thought was: Garlic infused olive oil? That can be a bad idea. Botulism multiplies in low-oxygen, low acid environments – like being covered with oil. Garlic, like most vegetables, can carry botulism spores. Fresh garlic in olive oil should be thrown away after a day or two in the refrigerator, and homemade garlic infused oil is dangerous. What about pressure cooking it? Does that make it safe?

It took a lot of searching, but I finally found out that the recipe is safe. According to the National Center for Home Food Preservation, botulism spores are killed if you can hold the temperature between 240°F to 250°F for 20 to 100 minutes, depending on the size of the jar. Conveniently, those are the temperatures you get with 10PSI to 15PSI pressure cookers. This recipe pressure cooks the jars for 2 hours, so there’s no way botulism can survive. After the jar is opened, the garlic keeps for a month in the refrigerator.
*From what I could find, 3 minutes at 250°F kills the botulism spores. But it takes 20 to 100 minutes to be sure that temperature reaches the center of the jar, depending on the size.

Enough scary, but neccesary, food safety tips. This recipe couldn’t be simpler if you own a pressure cooker and canning jars; the only hard part is peeling all that garlic. I’m already addicted to having a jar of roasted garlic in the refrigerator, ready whenever I want it.
*I used the technique shown here – [Youtube via Saveur.com]. It took multiple rounds of shaking to get all the cloves peeled. Don’t be gentle – shake as hard as you can. Or, If there is a good Asian market nearby, keep an eye out for pre-peeled garlic, which makes this recipe much easier.

Adapted From: Modernist Cuisine at Home 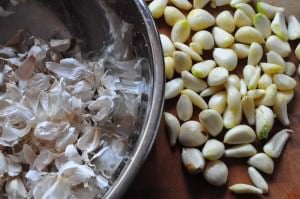 1. Fill the jars
Put everything in the canning jar, wipe the rim of the jar clean with a wet paper towel, then tighten down the lid finger tight.

2. Pressure cook the garlic
Put a rack in the pressure cooker pot and add 1 inch of water. (For my nine inch diameter cooker, this is about a quart of water.) Put the jar on the rack, lock the lid, and bring the cooker up to high pressure. Pressure cook on high for 2 hours. Let the pressure come down naturally. Carefully remove the jar from the PC, using tongs (or, even better a canning jar lifter). The jar will still be dangerously hot, with bubbling oil inside – let it cool to room temperature before handling. The sealed jar will last for a year at room temperature; refrigerate after opening, and the garlic will last for a month. 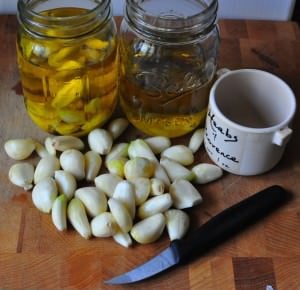