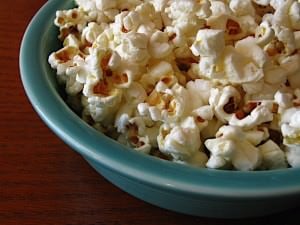 I was home alone with Tim, my youngest, and he asked for Popcorn as a snack. Now, we've been using Alton Brown's brown paper bag microwave popcorn recipe, and we usually have microwave popcorn in the pantry. But I remembered Michael Ruhlman's recent post on making popcorn on the stove top, and how easy he said it is. Michael hasn't led me wrong so far, so I gave it a try.
*I remembered it because of the great picture by Donna, Michael's wife. It's amazing how a good picture makes me want to try a recipe.

After making the popcorn, I thought "That was too easy." I tasted the results, and thought "How much money have I wasted on microwave popcorn that tastes like cardboard?" Then Tim dug in, and I knew we had a winner.

Now Tim requests "Daddy's Popcorn" a few times a week, and I taught Diane the recipe* so she could make it for him whenever he needs a popcorn fix.
*Say it with me: Another "So Simple It's Barely a Recipe" recipe. 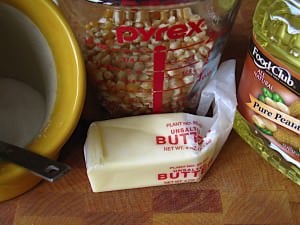 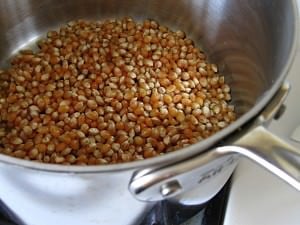 2. Pop the corn: Put oil and popcorn in the pot, and stir so all the kernels are coated with oil. Cover the pot and put it over medium-high heat Shake the kernels often, "swirling and hopping", as Ruhlman says, while they heat up. When the first kernel pops, continue to cook, shaking constantly, until the popping slows down to more than one second between pops. Remove from the heat immediately, and rest for 30 seconds for the popping to stop. Pour into a large bowl. 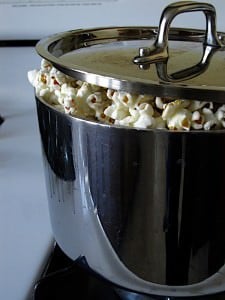 3. Season and serve: Sprinkle the popcorn with some salt, and toss. Drizzle with the butter butter and toss to coat evenly. Taste for salt, and add more if you need it.

Variations:
*Spicy popcorn - If you don't want to add butter, Ruhlman recommends adding a half teaspoon of chili flakes with the oil and popcorn.

Notes:
*This recipe doubles very easily. In fact, Ruhlman's original version has twice as much of all the ingredients - 1 cup of popcorn, and so on. When I used those quantities it was way too much popcorn for my 4 quart pot - it was still popping vigorously as it pushed the lid off of the pot. (See the picture, above.) I pulled the pot off the stove, and had about a quarter cup of unpopped kernels left.  ½ cup of popcorn is perfect for my 4 quart pot - it fills it right to the top.  If you do double the recipe, make sure you have an 8 quart pot to make it in.

*Popcorn salt is very finely ground salt, and is best for this recipe…but why buy it? Grind up some kosher or table salt in a mortar and pestle, or your coffee grinder that you keep to grind up spices*, until it's very finely ground. *You do have a coffee grinder you use just to grind spices, right?But I have to admit, I just use fine sea salt when I make this. It's my default "table" salt, which I buy in bulk from my local health food grocery. I find Kosher salt flakes to be too big for popcorn.

*I want to try this with a quarter teaspoon of ground chipotle powder; I think the smoky heat of chipotle would make a great popcorn. But…every time I get out the popcorn, Tim hears it, and comes running into the room, yelling "we're having POPCORN!" I don't think the heat will agree with him, and he's so excited that I switch back to the regular recipe. I'll have to make a batch after he goes to bed one of these nights, to see how it works.

*If you're trying to get a picture of the popcorn in the pot, take the picture before you put the pot on the heat, not after it's been on the heat for a while.  Or, at least make sure you put the lid down nearby, so you can clamp it back on the pot quickly when popcorn goes shooting across the room.