When I was looking for new recipes for Swiss Chard Overdrive week, I started at my usual point - Google. For some reason, a Swiss chard gratin popped into my head, so I did a search for that. It turned up a recipe...from a cookbook I already own. Doh!

. I started from the ideas in Alice's recipe, but streamlined it. Alice boils the chard until tender, toasts the bread crumbs in the oven, sautes an onion, adds the chard, then moves everything into a baking dish to brown in the oven. I cut this down to two pans, and two techniques - one pan for sauteing everything, then into the baking dish for browning in the oven.

The results were a dish that balances contrasts very well. The bitter chard had a creamy taste and texture from the flour and milk, with a hint of sweetness from the onions. The tender chard played well with the crunchy, toasted bread crumb topping.

This recipe is a lot lighter than I thought it would be; when I hear gratin, I think of potatoes covered in cheese and cream. This isn't a diet recipe per se - butter, milk, flour and bread crumbs are involved, after all. But the recipe uses just a little of those ingredients for flavor, with the chard being the star of the show. If you want to serve chard to someone who thinks they won't like it, this recipe is a great place to start.

Inspired By: Alice Waters The Art of Simple Food

Directions:
*For an overview of the basic technique, see my Swiss Chard Saute
1. Toast the bread crumbs: Turn the oven to 400*F to preheat. Melt 1 tablespoon of butter in a dutch oven over medium heat, then add the bread crumbs and toss to coat. Cook, stirring often, until golden brown, about 3 minutes. Remove the toasted crumbs to a plate.
*Pay attention and keep tossing in this step; bread goes from browned to burnt in an instant. 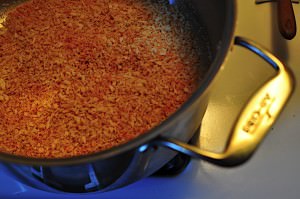 2. Prep the chard and onion: Separate the leaves of the Swiss chard from the stems. I do this by folding the leaf on my cutting board, along the stem. Then I run my knife down the edge of the stem, separating both sides of the leaf from the stem. Slice the stems into ¼ inch slices, and cut the leaves into 1 inch slices. Trim, peel, and dice the onion.
*If the chard has dirt on it, I fill a salad spinner

3. Saute the onions and the chard stems: Heat the 1 tablespoon olive oil and 1 tablespoon of butter in the dutch oven over medium heat until the butter stops foaming. Add the sliced stems and the onions, and sprinkle with ½ teaspoon kosher salt. Saute for 5 minutes, or until softened.

4. Steam the Leaves: Add the leaves to the pot, sprinkle with 1 teaspoon kosher salt, and toss to combine. Cover the pan and cook for five minutes, or until the leaves are tender.

5. Prepare the gratin: Sprinkle the flour over the chard, and stir until evenly mixed. Add the milk and the nutmeg, and cook, stirring, for 5 minutes.  The chard should be moist, but not swimming in liquid.  Taste for seasoning, and add more salt if necessary. Pour the chard into the baking dish, top with the bread crumbs in an even layer, and put the baking dish in the oven. Bake for 20 minutes, or until the crust is well browned and the chard is bubbling. 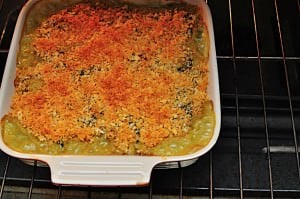 6. Serve: Remove the baking dish from the oven, let it rest for 10 minutes to cool down, then serve.

Variations:
*Use regular chard instead of the Swiss chard. It isn't as pretty, but it tastes just as good.

*For an extra hint of sweetness, take a trick from my recipe earlier in the week and add ¼ cup of raisins to the pot with the chard leaves.

because it looks good on the table as a serving dish, and it seems more authentic to use a french dish for this recipe.*  But Pyrex

would work fine as well.
*And...OK, you got me, because I like having the extra hit of color in the pictures for the blog.

Inspired by:
Alice Waters The Art of Simple Food

*Enjoyed this post?  Want to help out DadCooksDinner?  Subscribe using the RSS or Email options on the right, recommend DadCooksDinner to your friends, or buy something from Amazon.com