This week, I'm sharing recipes that were inspired by my winter CSA box.
Other than the bags and bags of potatoes.  I know how this person at The Kitchn feels, but potato recipes will be coming later this winter.

I've discussed the "what do you do with fennel" question before.  This time, I'm not going to cook it, I'm going to slice it thin and use it in a salad.

Raw fennel is very crunchy, and has a strong anise or licorice flavor. This pairs very well with orange.  This is good, because it is also the time of year where oranges flood into grocery stores.
Yes, I know that's not very locavore.  I view local and sustainable as a goal, not an absolute requirement.  If I had to live without lemons, limes, and oranges, it would be a VERY long winter. 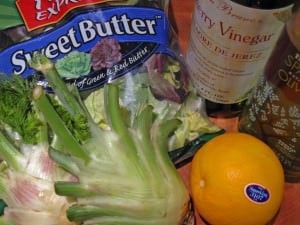 Directions:
1. Prep the Fennel: Trim the fronds from the top of the fennel bulb, and then cut out the core. Cut the bulb in half, then into thin slices. Put the sliced fennel in a large bowl, sprinkle with ¼ teaspoon kosher salt, and toss to coat evenly. 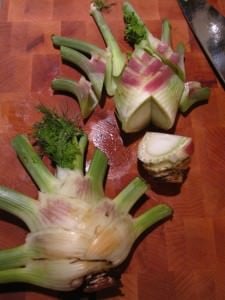 2. Section the Orange: Zest the orange, and set the zest aside. Cut the top and bottom off of the orange, set down on one of the cut sides, then cut the skin and pith off by cutting around the side of the orange. (See picture below). Over a small bowl, section the orange by cutting in a V shape just along the membrane holding each section together. When you're done, squeeze the juice into the bowl from the remaining membrane. Remove the orange sections to the large bowl with the fennel, leaving as much of the juice behind as you can for the vinaigrette.

3. Make the vinaigrette: Add the sherry vinegar, pinch of salt, pinch of pepper, pinch of orange zest, and dijon mustard to the orange juice in the small bowl. Whisk to combine, then allow to sit for a minute for the salt to dissolve. Whisk the olive oil into the bowl in a slow stream.
*For details, see my Vinaigrette Basic Technique

Variations:
Like in my lemon herb dressing, orange and herbs go well.  I'd start with thyme, but any herb you like will probably match well.

Fennel, orange and olive salad is a classic Sicilian recipe.  Adding some olives to this salad is a great idea.

Notes:
Taste the orange juice/vinegar mix after the salt has dissolved; you want balance of sweet and tart.   I add ½ teaspoon of sugar to the vinaigrette if the orange juice isn't sweet enough, or a splash more of the vinegar if it isn't tart enough.

Don't throw away the leafy fronds you trimmed from the top of the fennel. They are used as herbs, and will last for up to a week in the refrigerator. Strip the leafy part off the stems, and use it like you would use thyme or rosemary. It's particularly good with white-fleshed fish; I used fennel fronds with my grilled trout recipe.

Inspired by:
Basics class at the Western Reserve School of Cooking in Hudson, Ohio.