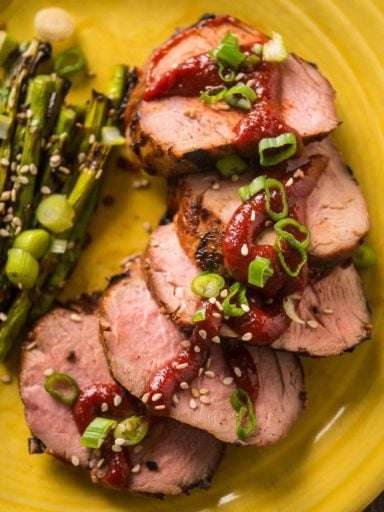 This is super-sized Korean barbecue. Instead of traditional thin slices of pork, grilled quickly, I’m grill roasting whole pork tenderloin. As much as I love those thin slices, they’re too much work for me on a weeknight. 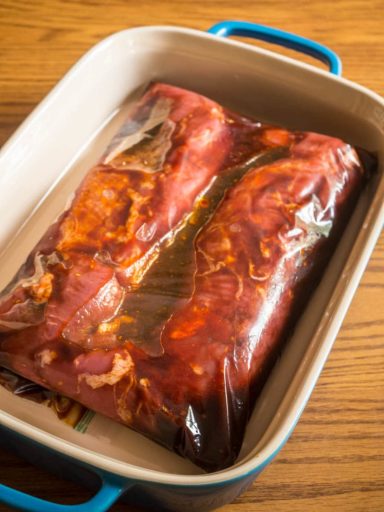 Did I mention my family is addicted to Gochujang, the spicy Korean pepper paste?2 I did? Sorry. Still, here’s another Gochujang based recipe. I can quit any time I want. I’ve been using it a lot, trying to satisfy their cravings…and my cravings.

If there’s a trick to this recipe, it is properly grilling the pork tenderloin. You can’t sear tenderloin over direct heat for the whole cooking time – they will burn on the outside long before they’re cooked in the middle. (And the gochujang marinade will make that worse – the sugar in the sauce burns quickly.) The key is the sear-and-move technique. Sear the outside of the tenderloin over direct heat, to get some grill marks going, then finish them over gentle, indirect heat. A remote probe thermometer makes this easy – poke the probe deep into the tenderloin, close the lid, and wait for the internal temperature to hit 145°F for medium doneness, with a hint of pink. 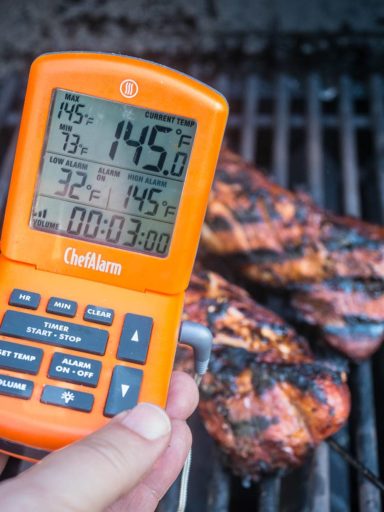 Done – get them off the grill!

I love probe thermometers, but you have to be careful with them on the grill. The thermometer probe is only rated to 400°F on less expensive thermometers – if the wire runs over the flames on a grill, it will get MUCH hotter than that. Keep the probe wire away from the high heat side of the grill and it will be fine.