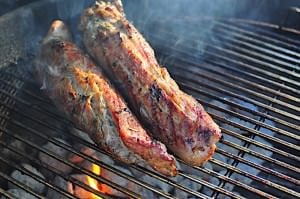 *This recipe is from Adam Perry Lang's BBQ 25; I used it as a test for my review.

Some cuts of meat need help.

Pork tenderloin doesn't have much flavor on its own, so it makes an excellent canvas for carrying other flavors. This is where Adam Perry Lang (APL hereafter) is at his peak. He uses every trick he has to build layers of flavors into this mild cut of pork. You get a browned, grilled exterior, basted with butter, oil and herbs, combined with the salty, sweet flavor of his brine. I complained about how elaborate his recipes can be in my review, but this one is worth every bit of effort.

This technique is a great idea for thicker cuts of meat, like pork tenderloin, that are not cooked all the way through once they have been seared on the outside. Why cook them over indirect heat when they can cook over indirect heat in their basting liquid?
*I liked this technique enough that I'm going to buy a grill safe pan; I need to decide between cast iron and enameled steel.

Directions:
1. Brine the pork: Put the brine ingredients in a gallon zip top bag. Mix, crushing the ingredients through the bag, until the salt and sugar dissolve. (Watch out for any sharp ends on the marjoram sprigs; don't poke a hole in the bag). Add the pork tenderloins, zip the bag closed, and let rest in the refrigerator for 1 to 4 hours.

2. Make the baste:Put the baste ingredients in the grill-safe pan. Leave the pan at room temperature to let the butter soften while you prepare the grill.

3. Prepare the grill: Prepare the grill so half of it can be used for cooking on direct medium-high heat. For my Weber kettle, I light a chimney starter* ¾ full of charcoal, and wait for it to be covered with ash, about 20 minutes. Then I pour it in an even layer over half of the charcoal grate. Next, I put the grill grate in the grill, let it heat up for a minute, then brush it clean with my grill brush.
*I highly recommend the Weber Chimney Starter

, because it is larger than most chimney starters. It holds 5 quarts of charcoal, which exactly the right size for cooking this recipe.

5. Rest, then serve: Let the tenderloins rest for 10 minutes, then roll them one last time in the baste. Cut the tenderloins crosswise into ½" thick slices, drizzle a little of the baste on top of the slices, and serve. 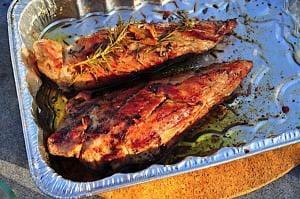 Variations:
*Bacon baste: Use half the butter (2 tbsp) and add 8 slices of bacon to the baste. (This was in APL's original recipe. I didn't have any unfrozen bacon.)
*APL Board Dressing: Adam pours some of the baste on the cutting board before slicing the tenderloins.

Notes:
*I know the "Grill the pork" section of the recipe is very wordy. Here it is, stripped down: Put the pork on one side the grill, over direct heat, and the baste pan on the other side, over indirect heat. Grill the pork for 3 minutes, then roll it in the baste. Flip, grill for 3 minutes, roll in baste again. Flip, grill for final 3 minutes. Move pork to baste pan, move baste pan over direct heat, cook for 6 minutes, rolling pork in baste occasionally. Grill pork for one more minute, or until done. Roll one last time, rest, slice, and serve.

*As I said in the opening, this is a great way to cook pork tenderloin, and I think it would also be a good technique to use with thick boneless pork chops. This recipe made better pork tenderloin leftovers than I'm used to having - rolling it in the baste really seemed to help the flavor.

*Due to the brine, I don't think of this as a weeknight recipe. But...if you have the time to start the brine around lunchtime, the rest of the recipe is quick enough for a busy weeknight.