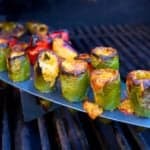 In my day, we didn’t have the Internet. We used two cans tied together by a string. That’s the way it was, and we liked it!
Apologies to Dana Carvey

Back in the day, when I first started searching the Internet for grilling information, there wasn’t much out there. I had the Virtual Weber Bullet , the BBQ Forum…and that was about it. I scoured those message boards every day for new ideas, reading everything that was posted.
I’m still amazed that I could read everything posted on the Internet about barbecue and grilling. Nowadays? That would be like trying to drink Lake Erie by jumping in halfway to Canada with a straw.

One of the ideas that bubbled up in the forums was Dragon Turds - a smoked version of jalapeno poppers.
Yes, dragon turds. BBQ guys are a bunch of eight-year-old boys at heart, giggling about poop jokes. Me included. Hehehehe - he said turd.

Then some backyard genius invented the jalapeno roaster, a metal plate full of holes to hold the jalapenos vertically. The rest is history. Now everyone knows about stuffed jalapeno peppers, and there are jalapeno roasting kits in every shape you could want, from a jalapeno pepper, to an egg, or even the great state of Texas. I recommend a rectangular rack because it is more space efficient on the grill.
(I should take my advice - I bought a jalapeño pepper shaped rack. It's cute, and looks great in pictures, but it takes up a lot of room on the grill.)

Most jalapeño stuffings are mainly cream cheese. And, not that there’s anything wrong with that, but I like stuffing my peppers with regular cheese. (Think mini Chile Rellenos.) The result overflows the peppers, leaving the edges crispy and blackened, and full of molten cheese goodness.