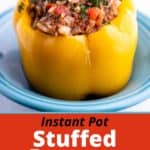 I was positive that Instant Pot Stuffed Peppers were a bridge too far.

It’s Saturday afternoon, and I’m testing stuffed peppers. Should I cook the onions and the meat first, or stuff everything in the peppers raw, like I’m making pepper-wrapped meatballs? How long should I pressure cook? Natural release or quick release? As I mix meat and stuff peppers, I keep thinking: “There’s no way the kids are going to touch these.”

As I cook the peppers, the vultures start circling. “That smells great. What are you cooking?”

“Stuffed peppers.” I say, waving a bell pepper cap at them, sure it will be the final straw. But, no, they still seem interested.

Dinnertime rolls around, and I unload peppers from different pressure cookers. I start the hard sell: “Suppertime - and everyone has to take at least a bite from each of these different peppers to let me know…” They start scooping peppers on to their plates without any hesitation. Some even back for seconds. The “start with raw meat” version is clearly the favorite. But, more important is, my kids, eating food that’s stuffed in a vegetable. I’m pleased…and shocked.

Now, I can’t say these peppers will be a hit with your kids. But, don’t dismiss them out of hand, like I almost did. Instant Pot Stuffed Peppers could surprise you.

Instant Pot Stuffed Peppers. Peppers stuffed with beef, onions, rice, and tomatoes, cooked in under a half an hour in the pressure cooker.