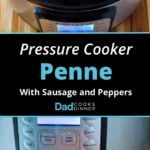 This is not the red-sauce pasta I had growing up - which I still love - but this feels different. Instead of a sea of red sauce, it has big, defined chunks. Pieces of sausage, peppers, chunks of diced tomato, and the short penne noodles that are - shhh - much easier to eat than my beloved childhood spaghetti. This is why I was amazed how much the kids like it - I was worried they would turn me down because they can see the pieces. But they devoured it, and asked me to make it again. (“Maybe without so many peppers next time” was the only suggestion. Not likely, kid!)

Penne with Sausage and Peppers is a one-pot special. Everything goes in the pressure cooker, my beloved Instant Pot. To serve, I pull the pot liner out of the pressure cooker base and set it on a hot pad in the center of the table. I’ll drop a ladle in the pot, set the block of parmesan and the grater on a plate, grab the jar of red pepper flakes (for my wife), and toss a Caesar salad on the side.

Is it as quick as jarred pasta sauce? Not quite. I insist on browning the sausage, and sautéing the onions, because they add so much flavor to the finished dish. But it’s still quick, and hands off once the pot is closed. And, oh my, does this taste better than any jar you can get at the store....

Pressure Cooker Penne with Sausage and Peppers. A one-pot pasta from the pressure cooker, perfect for a rustic weeknight dinner.

My other Pressure Cooker Recipes