from my trip to Provence, and it is Tim's favorite. I love watching him carefully pry off the cap, pinch two fingers worth of salt, and carefully sprinkle it over his beans in a circular motion.

The only problem is, I can't keep up with his demand for beans! I used to make a pound of beans at a time, and I would have a couple of two-cup containers left over that I could freeze for make-ahead beans. Now I only get one extra container, and Tim eats it for lunch the next day.
*As far as problems go, this is a good one to have. I love that Tim is eating his beans. But I'm going to have to start doubling my bean recipes to get ahead of him. 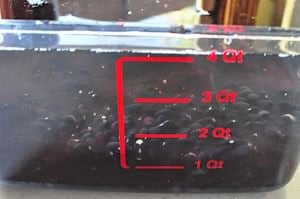 I've been trying out a bunch of simple bean recipes to find new ones that pass Tim's "yuck factor" test. (If there is too much other stuff in there, he's not going to eat it.) This vegetarian black bean soup is one of my favorites. I love the combination of earthy black beans with cumin, coriander and oregano. Pureeing some of the beans gives the soup a thick, rich, creamy body. One of the keys to the recipe is to season the soup heavily at the end; the lime gives it a hint of fruit and acid, but the soup needs a lot of salt and pepper to bring the flavors out. When making soup, seasoning to taste makes difference between bland and delicious. 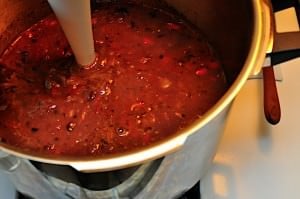 Pressure Cooker Black Bean Soup - vegetarian, though you wouldn't know that just by tasting it.

Variations:
*Non-vegetarian soup: Start the soup by sauteing a little chorizo or Italian sausage; or, add a smoked ham hock or turkey leg to the pot with the beans. Substituting homemade chicken stock for some of the water is also a good idea.