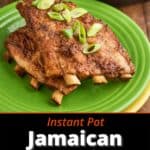 Ahem…sorry. Saying “Jerk” makes my inner 8-year-old come out. It may sound like I’m calling it names, but Jamaican jerk is derived from the same root word as jerky - it was originally meat dried over an open wood fire.

Jamaican Jerk is a justly famous spice blend. Made primarily of Scotch Bonnet peppers and allspice berries, it has a bunch of other flavors in it, including onions, garlic, thyme, and cinnamon. Soy sauce is a surprisingly common ingredient - I think Jamaican cooks, like cooks the world over, like the salty, umami depth that soy sauce adds.

A warning about Scotch Bonnet peppers, and their close relative, Habanero peppers. These peppers are not messing around, and should come with a biohazard warning. I once rubbed my nose after handling Habanero peppers, and it’s not a mistake I’m going to repeat. I wear gloves while seeding these peppers, and even then I wash my hands when I’m done handling them. I seed the peppers to reduce the heat, leaving their delicious fruity flavor as one of the main parts of the Jerk paste. That doesn’t mean no heat - I’d rate these ribs a medium to medium-high heat level - but they’re definitely not Atomic Death By Fire ribs. (Not that there’s anything wrong with that - if you want extra heat, go ahead and leave the seeds in the peppers when you add them to the food processor.)

My big Jerk change is a liquid substitute: I replace the rum in the jerk paste with pineapple juice. (It’s not traditional, but hey, the Jamaican flag has a pineapple right in the middle - it can’t be that far off.)

Most marinades don’t actually tenderize, but this one does, thanks to pineapple containing the enzyme Bromelain. Bromelain is a natural meat tenderizer, breaking down meat fibers. This is great in small doses, but don’t over-marinate these ribs, or you’ll have mushy meat. I go for 4 hours max of marinating.

Of course, my other big change is not cooking the ribs over a fire of pimento wood - the wood that allspice berries come from. I’m cooking the ribs in my Instant Pot, where they’re pull-apart tender after a half hour at high pressure.

Looking for a taste of the Islands? Try these jerk ribs - you won’t be disappointed.