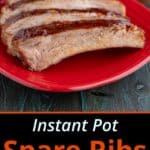 I know, I'm already cheating by cooking my ribs in an Instant Pot. Liquid smoke felt like a bridge too far. But…everyone else kept using it. And they left comments in my rib recipes singing its praises. Liquid smoke? Really? I had to try it out, expecting to say "Ha!. It's not worth it!"

Instead, I'm asking myself: why did I wait so long to use liquid smoke?

What are Spare Ribs?

Spare ribs are pork ribs from the lower part of the ribcage, with the sternum and rib tips still attached. They are larger than baby back ribs, which come from the upper part of the ribcage, and spare rib meat has more fat and connective tissue. Spare ribs take longer to cook than baby back ribs, but are juicier when they're done cooking, thanks to that fat and connective tissue. Sometimes you will see St. Louis Cut spare ribs, with the rib tips and sternum removed. You can substitute St. Louis Cut for regular spare ribs in this recipe, and the instructions and cooking time remain the same.
If you want to make baby back ribs, check out my Instant Pot Baby Back Ribs; if you have Western ribs (aka Country ribs), use my Pressure Cooker Pork Western Shoulder Ribs with Barbecue Rub and Sauce recipe.

Spare ribs in the Instant Pot are almost too easy. The steps are:

I made two batches of Instant Pot Spare Ribs, one with a tablespoon of liquid smoke in the water, the other without. I expected a strong woody flavor, kind of like over-smoked meat; instead, I got a flavor enhancer. It's a terrible description, but the liquid smoke ribs taste "meatier," not smokier. I'm a liquid smoke convert, and I'm going to update all my pressure cooker ribs recipes to recommend it.
I know, I know. I was once a One True BBQ fanatic myself. And I still pull out the grill when I can. But, when time is short, I take the easy way to tender Instant Pot spare ribs.

What is liquid smoke?

Liquid Smoke is made by burning wood in a low-oxygen environment and distilling the water vapor that is produced. That's right; liquid smoke is actually condensed wood smoke. It's a side effect of making charcoal, and "wood vinegar", as everyone else calls it, has been around for centuries. (Pliny the Elder mentions it back in Ancient Rome. See, Latin class was worth something!)

These ribs are the taste of a summer barbecue any time of the year. I serve them with cole slaw, my Instant Pot Potato Salad, my Instant Pot Cajun Pinto Beans, and a cold beverage.

Instant Pot Spare Ribs - quick and easy, pressure cooked with liquid smoke for a big meaty flavor, brushed with barbecue sauce, and glazed under the broiler.

Barbecue Rub (2 tablespoons of my Homemade Barbecue Rub), or use your favorite store-bought rub

Barbecue sauce (1 cup of my Easy BBQ Sauce), or use your favorite store-bought sauce