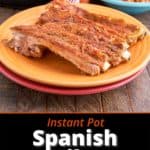 I’ve been on a smoked Spanish paprika kick recently (Can you tell?). I think Steve Sando at Rancho Gordo knows this, because a bonus in my bean box was a jar of pimenton from Extremadura, Spain.

After that, I used my typical Instant Pot ribs technique. I pour a cup of water into the pot, then stack the ribs in the pot loosely, bone side facing down. I pressure cook for 30 minutes with a Natural Release, then run the racks under my oven’s broiler to brown them a bit. Quick, easy, tender ribs in a little over an hour, end to end. Buen Provecho!

Can’t find St. Louis Cut Spareribs? Baby back ribs cook the same - make the recipe as written. Full slabs of spareribs take a little longer to cook, because they’re larger, and have more cartilage in them. Cook for 40 minutes at high pressure in an Instant Pot or other electric PC, or for 36 minutes in a stovetop PC.