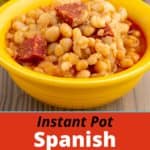 I read it for the pictures.1

Joanie Simon, YouTube food photographer extraordinaire, recommended Art Culinaire Magazine for food photo inspiration. And, boy, is she right - the pictures are art-film worthy, and the professional chef recipes are way beyond what I cook at home.2 But that doesn’t mean they can’t spark ideas. I noticed Rancho Gordo Alubia Blanca beans mentioned in in a high-end Judiones de la Granja recipe from MiniBar in Washington, DC. This quick mention led me down the path to this recipe - Instant Pot Spanish Farm Beans.

De la granja means “of the farm” - this recipe is the Spanish farmhouse version of pork and beans. The pork is dried Spanish chorizo; the beans are small white beans - try to get Alubia Blanca beans from Rancho Gordo if you can, but Navy beans make a good substitute. Add onions, lots of garlic, and a heaping helping of Pimenton de la Vera, Spanish smoked paprika. (Spanish smoked paprika is one of my favorite spices.)

So, fire up the pressure cooker, sit back, and picture a pot of beans on a farm table in the hills of Galicia.

Can’t find Spanish dried chorizo? Don’t use Mexican chorizo - it is a very different kind of sausage. Substitute a hard, dried sausage like a salami or sopresatta. Or, if you're desperate, a smoked sausage like kielbasa.

To make this a vegetarian recipe, skip the chorizo.

Spanish smoked paprika (or any smoked paprika) adds a wonderful smoky taste to this dish, just like it says in the name. But, if you can't find it, go with regular paprika.

I get the “to soak, or not to soak?” question all the the time. I started testing the recipe soaking the beans, but the Alubia Blanca beans are so small, and pressure cook so quickly, that I abandoned soaking and just cook them directly from dried.

That doesn’t mean you can’t soak the beans. They turn out fine, though the bean broth isn’t quite as full bodied. Soaked beans cook much quicker, 8 minutes at high pressure.

Want to soak your beans? Soak them overnight, then pressure cook for 8 minutes with a quick pressure release.

This recipe freezes well, in 2-cup containers, for up to 6 months. The bread crumb crust will get soggy, but still taste good.