It’s time to update my most popular slow cooker recipe for the pressure cooker.

Now, before we get started, I have to add a disclaimer. (I’m hoping to head off blistering comments from barbecue fanatics.) For the record: I know this isn’t barbecue. It isn’t cooked with smoke, or using live fire. Think of this as barbecue sauce braised pork, and go here for real, low and slow barbecue. OK? OK.

If I’m disclaiming this recipe already, why am I sharing it? Because it’s one of my go-to, “It’s a busy Thursday and I need a dinner with, at most, five minutes effort” recipes. With minimal effort I get tasty pork, “slow” cooked in a little over an hour in the pressure cooker.

Like I said, this recipe is so easy it’s barely a recipe - it’s more of a technique. Sprinkle the western ribs with salt and barbecue rub, put them in the pressure cooker with a half cup of water and a half cup of barbecue sauce, and pressure cook on high for 45 minutes. The result? Tender pork with a sweet sauce.

These strips of pork are great on their own - I eat them like boneless ribs - but my kids like to shred them and pile them on hamburger buns to make a fantastic pork sandwich.

Pressure Cooker Pork Western Shoulder Ribs recipe - boneless "ribs" from the pressure cooker in a little over an hour. So simple it is barely a recipe - more of a technique. 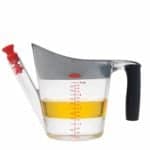 I make my own homemade barbecue rub and barbecue sauce. My homemade rub is salt-free; if you use a store-bought rub, and it has salt as the first or second ingredient in the ingredient list, skip the kosher salt - the rub is salty enough.