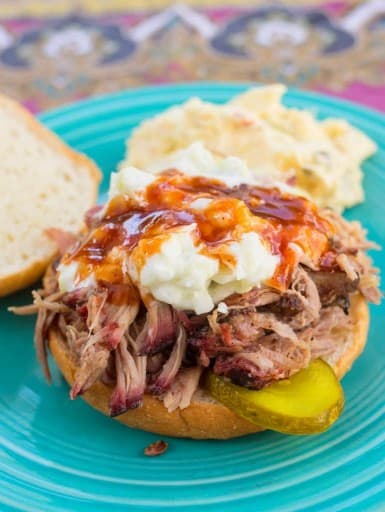 Pulled pork is my gateway to low and slow barbecue. Brisket is fantastic, and I lust after ribs, but pulled pork is easy and delicious. If you want to find out why people become barbecue fanatics, make yourself some pulled pork.

How? Well, if you have a real barbecue pit or smoker, it’s easy. (And you don’t need me to explain how to do it – you’re already an expert.) I learned how to make barbecue on my Weber Smoky Mountain. The WSM makes it easy to keep a low fire going for the eight to twelve hours necessary for real barbecue. But, that was back when I was a barbecue fool – I was doing ten hour cooks almost every weekend. 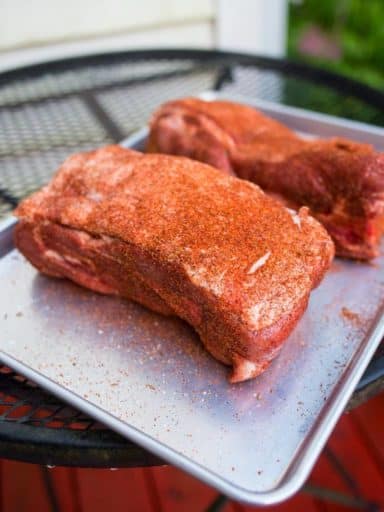 Pork butt oasts, rubbed and ready for the grill

Eventually, I moved on from my barbecue phase. (Also known as having kids. Suddenly, finding time for a ten hour cook every weekend was…difficult.) My poor WSM was neglected, and when I didn’t clean it out after my last cook of the year, all sorts of interesting things started growing inside. (I tried to clean it out, but I was never able to stop the spread of white fuzz.)

That’s when switched to doing barbecue on my kettle grill. It’s not as easy, but it’s definitely doable, and when I use the kettle as a regular grill it burns off anything left over from smoking. 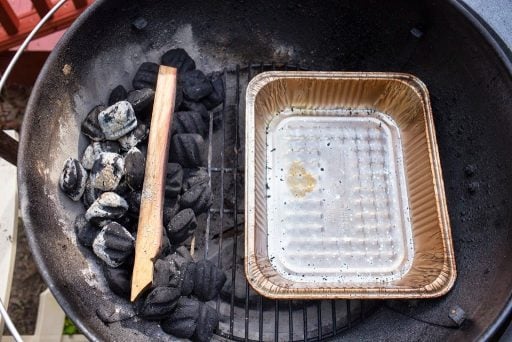 Grill set up for indirect low and slow barbecue

The trick to using a kettle grill as a smoker is the Minion Method. Make a big pile of unlit coals, add a small amount of lit coals to the top, and use the airflow through the grill to control the temperature. The unlit coals provide fuel for the entire cook, as the fire slowly spreads through the pile. Opening the vents increases the temperature by speeding up the spread of the fire; closing the vents decreases the temperature by slowing down the spread of the fire. I start with my bottom vent half closed and my top vent half open to get the heat going. Once it hits 250°F I close the top vent down to halfway open, and control the fire by opening and closing the top vent. (Never close the vent all the way – you’ll smother the fire.) The Minion Method provides steady heat for eight to twelve hours of cooking, depending on how much charcoal you add to the grill.
I learned the Minion Method from the Virtual Weber Bullet website – it is the way they control the temperature on the WSM. It adapts pretty well to the kettle grill. If you dive deep into barbecue, you want to switch to a true barbecue smoker, and the WSM and the Virtual Weber Bullet are great places to start looking. 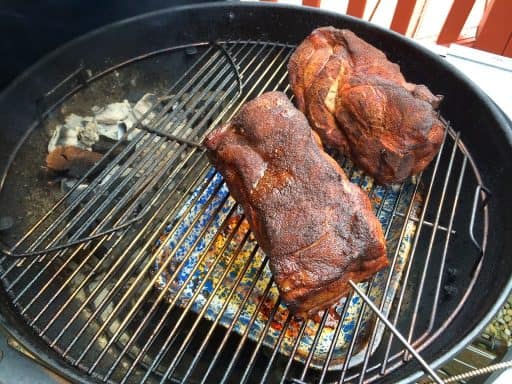 Pork butts on the grill

I use two other tricks to bring the cooking time down.

First, I buy a whole (8 pound) pork butt roast and ask my butcher to cut it in half. The two smaller roasts cook a lot faster than the entire roast.
“Faster” is relative – 8 hours for two roasts, vs 12 hours for one huge one. This *is* low and slow barbecue we’re talking about, after all.

The final trick is the Texas crutch – wrapping the pork in aluminum foil once it reaches 150°F. This speeds up the cooking time by avoiding the dreaded “barbecue stall”, where the internal temperature gets into the 160s, then sits there for hours before the temperature starts climbing again. Wrapping the pork in foil traps the heat, braising the pork, and speeding the cooking time. I want 195°F internal for tender, sliceable pork shoulder, and 205°F for pullable pork. (I’m shooting for 205°F in this recipe.)

Now, pork shoulder is forgiving. As long as you get it to 205°F internal, and cook it for hours, the results will be great. If the heat spikes up to 400°F, or down to 225°F, the pork will be fine; it will just change the cooking time. Get the temperature back between 250°F and 300°F as soon as you can, but it’s not the end of the world if the grill is running hot or cold.

And, when you’re done? Shred the pork with a pair of forks, mixing the delicious, mahogany bark from the outside of the roast with the tender meat on the inside. (If you’re in a hurry, get a pair of Bear Paws.) Serve on cheap white buns with your favorite sauce, and (traditionally) dill pickle slices and cole slaw. Finally, consider the purchase of a WSM as you devour your awesome low and slow pork.

BBQ Pulled Pork on a Kettle Grill recipe. How to make low and slow barbecued pork shoulder on an everyday kettle grill.

Barbecue rub (just enough of my homemade rub for this recipe) 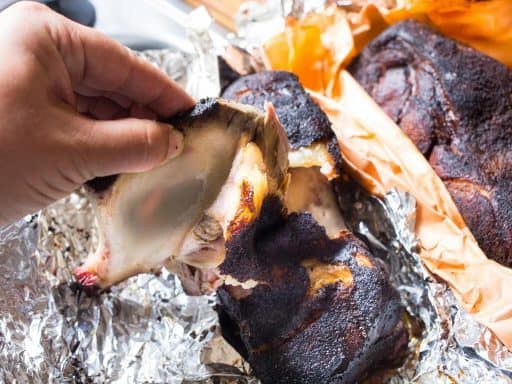 It’s a good sign when you can pull the bone out of the roast with just a tug. 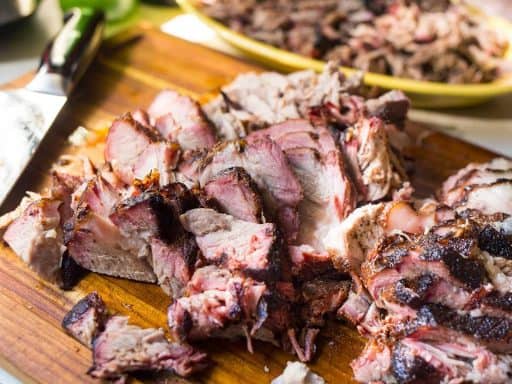 Pulled and ready to serve