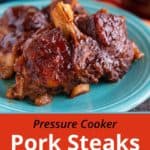 Pork shoulder is my favorite piece of pig, and these St. Louis style Pressure Cooker Pork Steaks show it off in all its glory.

Pulled (or chopped) pork shoulder is the dominant style of barbecue in most of the Southern US. Pulled pork reigns from North and South Carolina in the east, and sweeps west until it hits the wall of beef barbecue in Texas. Barbecued pork steaks are St. Louis specialty1, cross-cut from the shoulder into inch thick steaks.

Pork shoulder needs long cooking times. The shoulder is a hard-working muscle, full of connective tissue. Undercooked pork shoulder is tough and chewy. If you cook it long enough, the connective tissue melts into gelatin, and the shoulder turns tender and juicy. An Instant Pot (or another pressure cooker) stands in for the traditional barbecue smoker. I replace hours and hours of low-and-slow barbecue with 45 minutes at high pressure. Sure, it’s not the same as Real Barbecue™. But it is juicy, tender, and a whole lot faster.

(For the record: Yes, I know this isn’t barbecue. I don’t know why I bother apologizing; angry barbecue purists looked at the title and jumped straight to leaving angry comments. As we speak, they’re yelling at me about sullying the spirit of St. Louis. Oh well. That’s what the “Delete Comment” button is for.)

Here in Ohio, the trick to this recipe is finding thick-cut pork shoulder steaks. My local grocery stores sell pork shoulder steaks, but they always cut a half-inch thick. I have to take a shoulder roast to the butcher and ask him to cut it thick, somewhere between an inch and an inch and a quarter. Other than that, I consider this a weeknight recipe; it takes a little over an hour to cook, but only ten minutes of that is active time.