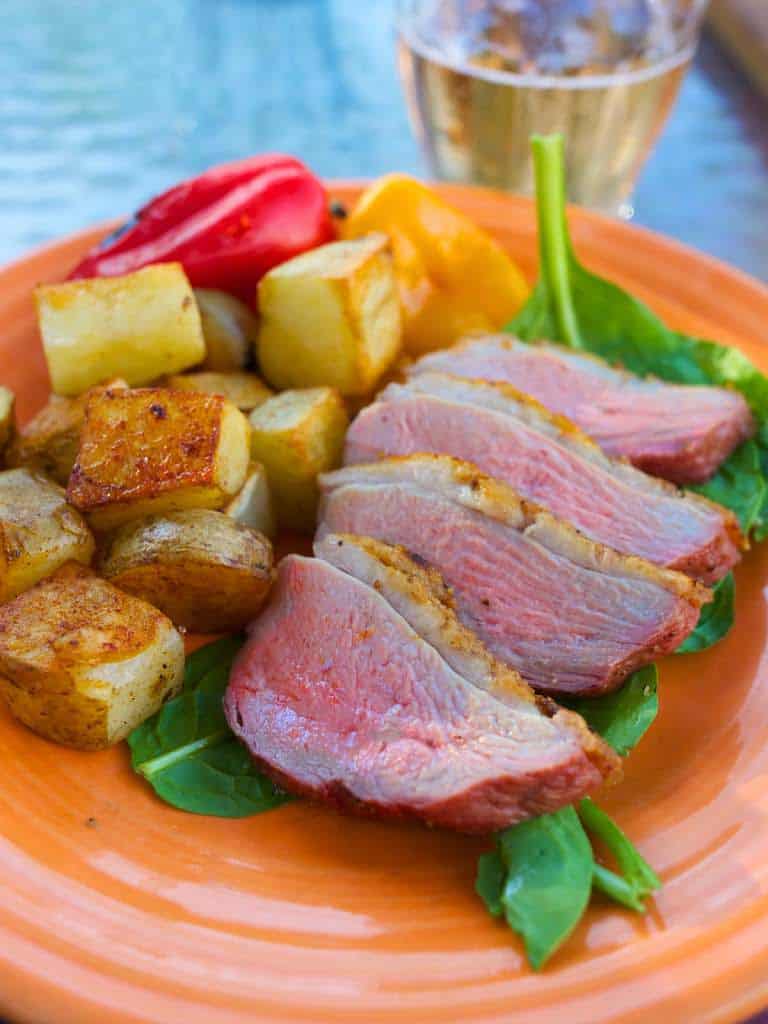 The duck breasts used in this post were donated by Maple Leaf Farms. They’re good people - If you’re looking for duck, seek them out. Phew, now I’m good with the FCC.

I love the idea of duck breasts on the grill. Crisp skin, a hint of smoke, medium-rare duck meat, and luscious duck fat.

The problem is the luscious duck fat - which, when it renders out, causes a surprisingly large grease fire in the grill. (Not that I’ve ever done that, oh no, not me.)

Chicken has the same problem, especially chicken thighs - lots of fat, lots of flames. I cook chicken with indirect heat to keep the fat away from the flames - which works when I want chicken cooked to 160°F. But I want my duck breast medium-rare, 145°F, with crackling crisp skin. What to do?
*Now, theoretically, I could make skinless duck breasts…but, ugh, I can’t bring myself to do that. Crackling skin is the best part!

When Maple Leaf Farms invited me to Duck University, I jumped at the chance. Learn about duck? I’m there.

After the cooking class, when Q&A started, I was ready to spring my question…but I was too slow. Before I could say anything, one of my fellow classmates shot her hand up and asked “how do I grill duck breast?”

Turns out, I’m not the only one with flare-up issues. There was a general muttering to the tune of "yes, that's hard." But someone from Maple Leaf Farms threw out a suggestion - sear the duck breast, skin side down, in a pan in the kitchen, to render out most of the fat. Then, move the duck to the grill to finish it.

I wish I remember who suggested this, because the idea was genius. But as a grill fanatic, I thought “Kitchen? I don’t need a kitchen. I can do that right on the grill.”

It worked like a charm - the duck breasts seared in a grill safe pan, rendering lost of fat; then they went over the fire for a quick sear. I didn’t want the pan full of duck fat to go to waste, so I browned a side dish of duck fat potatoes.
Which I may enjoy more than the duck itself. It’s tough - crackling duck skin, or crispy duck fat potatoes? I’ll guess I’ll have to keep sampling to figure out which I prefer.

1. Score and season the duck breasts

Set the duck breasts on a cutting board, skin side up, and score the skin in a ½ inch diamond pattern. Cut a series of parallel lines, ½ inch apart, through the skin and into the fat, but not into the breast meat. Turn the breast 90 degrees, then cut another series of lines ½ inch apart, across the first set to make the diamond pattern. Repeat on all the duck breasts. Sprinkle both sides evenly with salt and pepper, and let rest at room temperature. 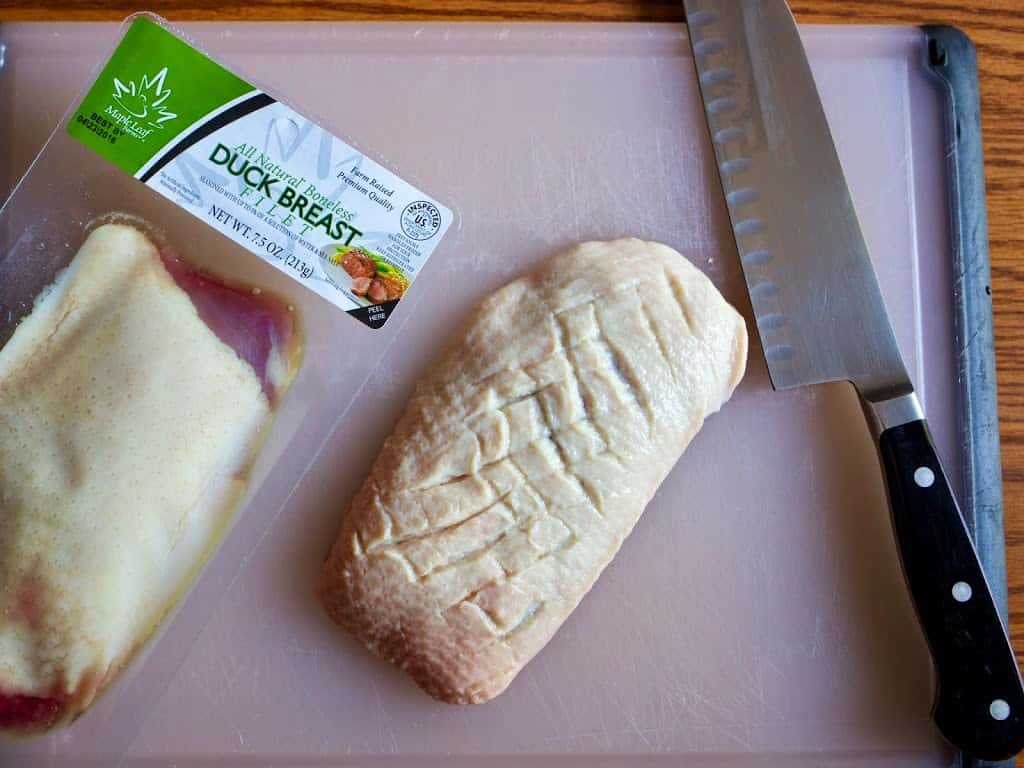 Toss the potatoes with ½ teaspoon of salt in a medium, microwave-safe bowl. Use your hand to make a hole in the center of the pile of potatoes, pushing them to the outside of the bowl. Seal the bowl with plastic wrap and microwave until the potatoes are just done, 6 minutes in my 900 watt microwave.

3. Set the grill up for indirect medium-high heat, and preheat the pan

Set your grill up for indirect medium heat, and preheat the pan over direct heat. On my charcoal grill, I light a chimney full of charcoal (60 coals), wait for it to be mostly covered in gray ash, then pour it into a tight, single layer over half of the grill. I put the grill grate in the grill, brush it clean with my grill brush, and put the grill pan on the grate directly over the coals. Then I close the lid and heat the grill pan heat for five minutes. (On a gas grill, I preheat with all burners on high for ten minutes. Then I clean the grate with my grill brush, turn off half the burners, turn the other half down to medium-high, and put the grill pan over the lit burners. Then I heat the pan for five minutes with the lid closed.) 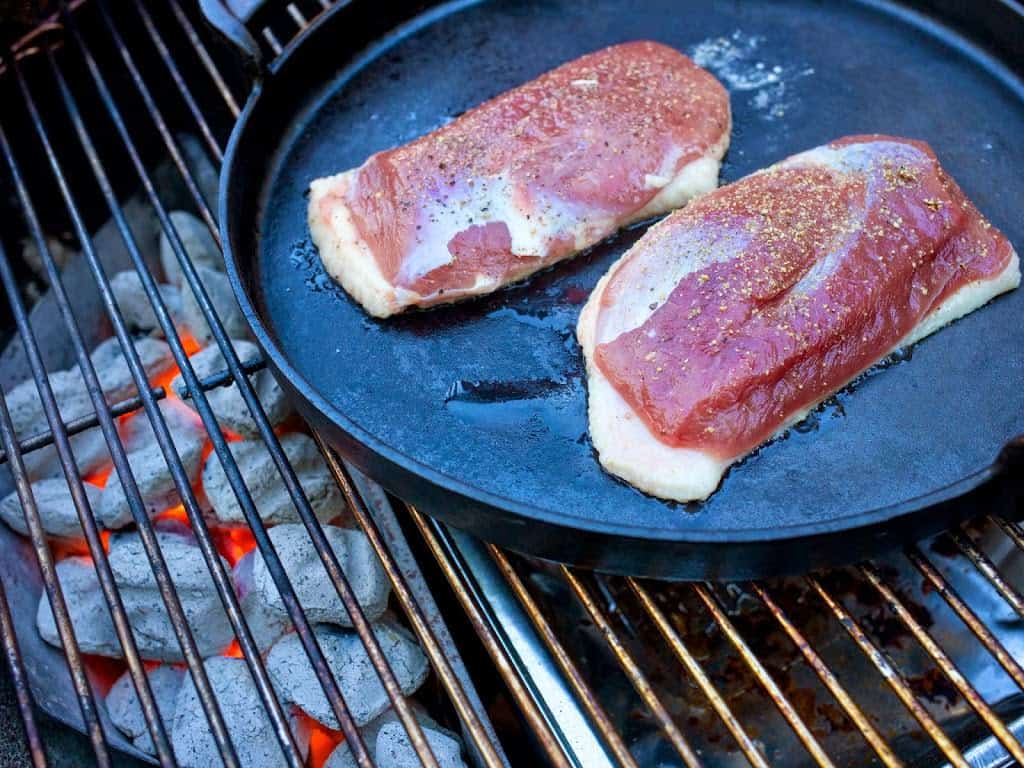 4. Render the duck fat in the pan

Move the heated pan to the indirect heat side of the grill, and set the duck breasts in the pan, skin side down, pushing down on them to make sure they have good contact with the pan. Close the lid and cook until the fat is rendered around the edges of the skin, the skin is golden brown, and the duck is 130°F to 135°F internal temperature in the thickest part, about 10 minutes. (Check the fat on the side of the breast - it’s ready when the skin and meat are touching, without any fat between them.) 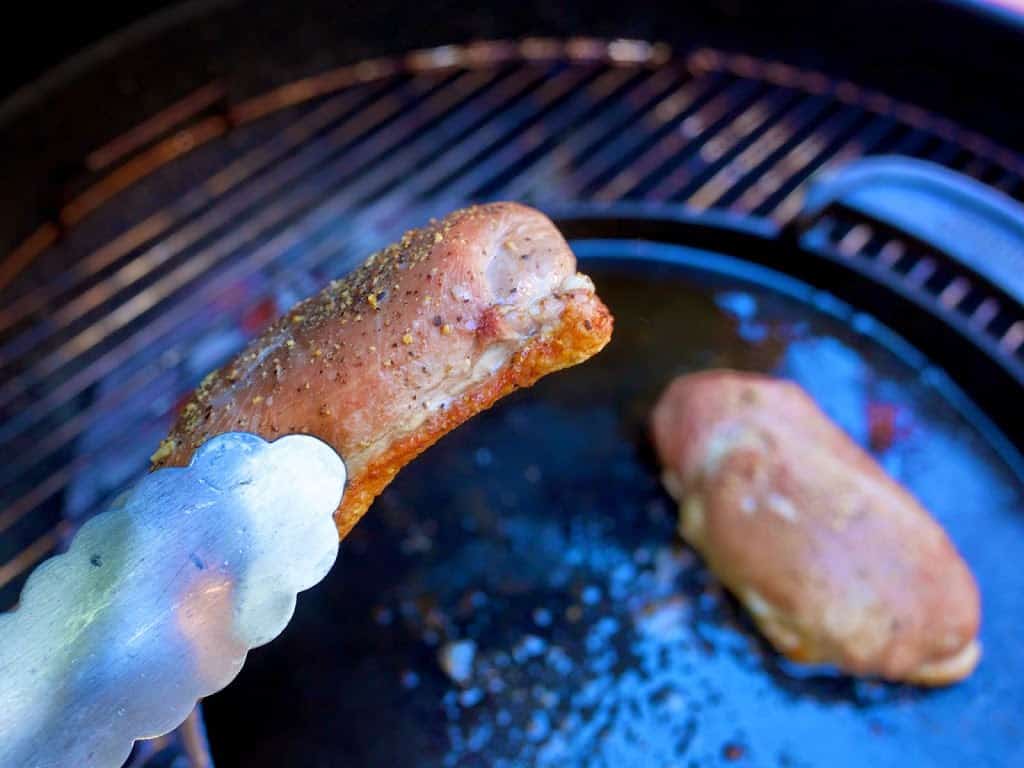 5. Grill the duck breasts to brown them

Move the duck breasts out of the pan and onto the grill over direct heat, starting skin side up. (This is not the time to go get a tasty beverage - you need to watch the breasts over open flames, especially when they are skin side down - duck fat will create quite a fire.) Grill the breasts skin side up until the flesh on the bottom is starting to brown, about 2 minutes, then flip skin side down. Grill skin side down until the dripping fat starts flaring up - 30 seconds to a minute. Flip them skin side up again and grill until the bottom is nicely browned, about 2 more minutes, then flip skin side down again and grill until the fat starts to flare up and the skin is browned, 30 seconds to another minute. Remove the duck to a plate when it reaches 140°F to 145°F in the thickest part - if it needs more time on the grill, keep flipping, mostly with the flesh side down to avoid a duck fat fire.

6. Brown the potatoes in the duck fat

The pan should have a layer of duck fat in it; carefully slide it over the direct heat part of the grill - you don’t want to slosh duck fat onto the open flames. (If you do, slide the pan as far away from the flames as possible and close the lid to smother the fire, then try again.) Pour the par-cooked potatoes into the pan, then arrange them in a single layer with the cut sides down. Cook the potatoes until they are browned and crispy on the bottom, about four minutes, then flip and cook until a second side is browned and crispy, about four more minutes. Remove the potatoes to a bowl with a slotted spoon, letting the excess duck fat drip back into the pan. Sprinkle the potatoes with the teaspoon of smoked Spanish paprika and toss to coat. 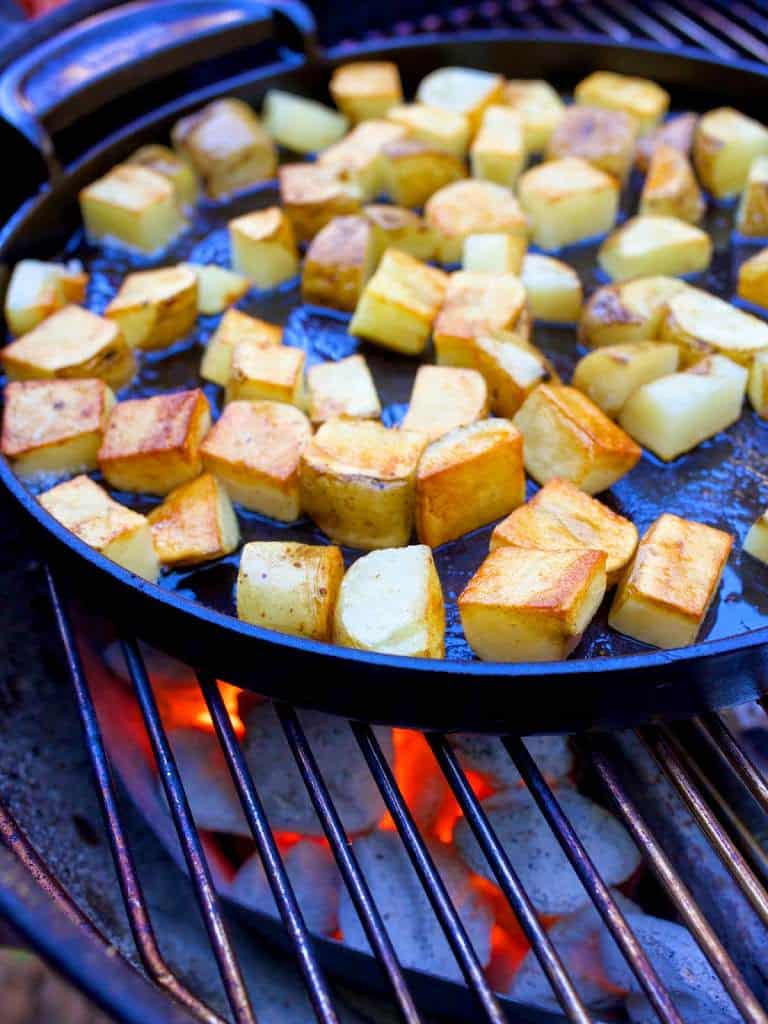 Slice the duck breast crosswise into ½ inch thick slices and serve with the potatoes. 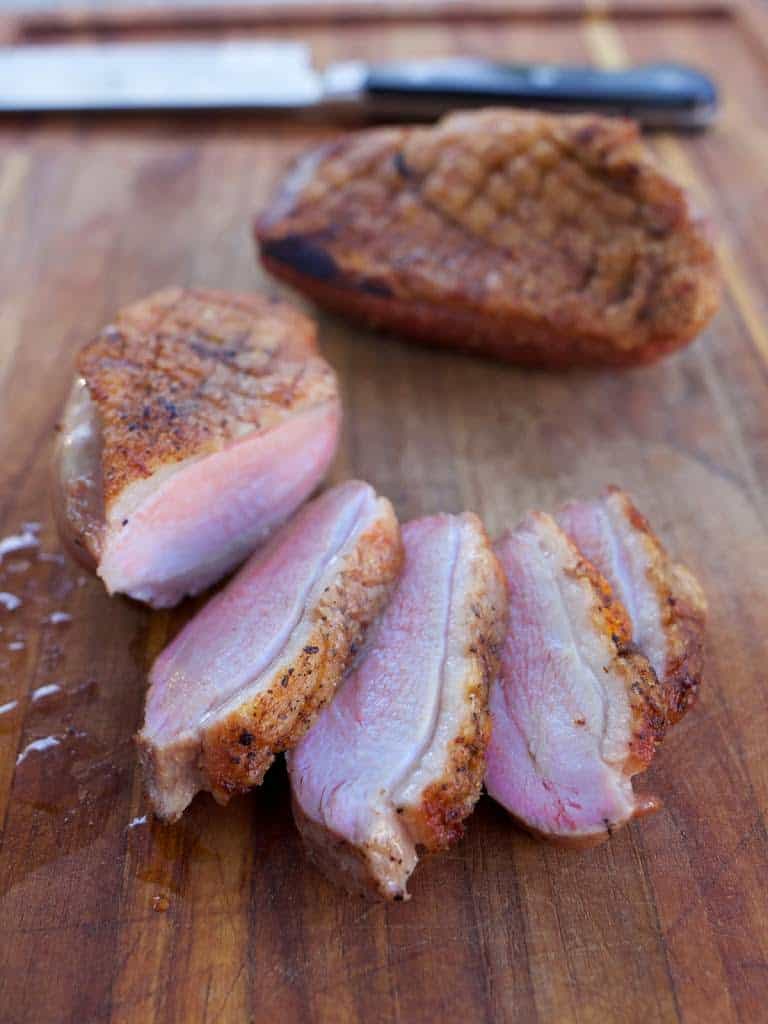