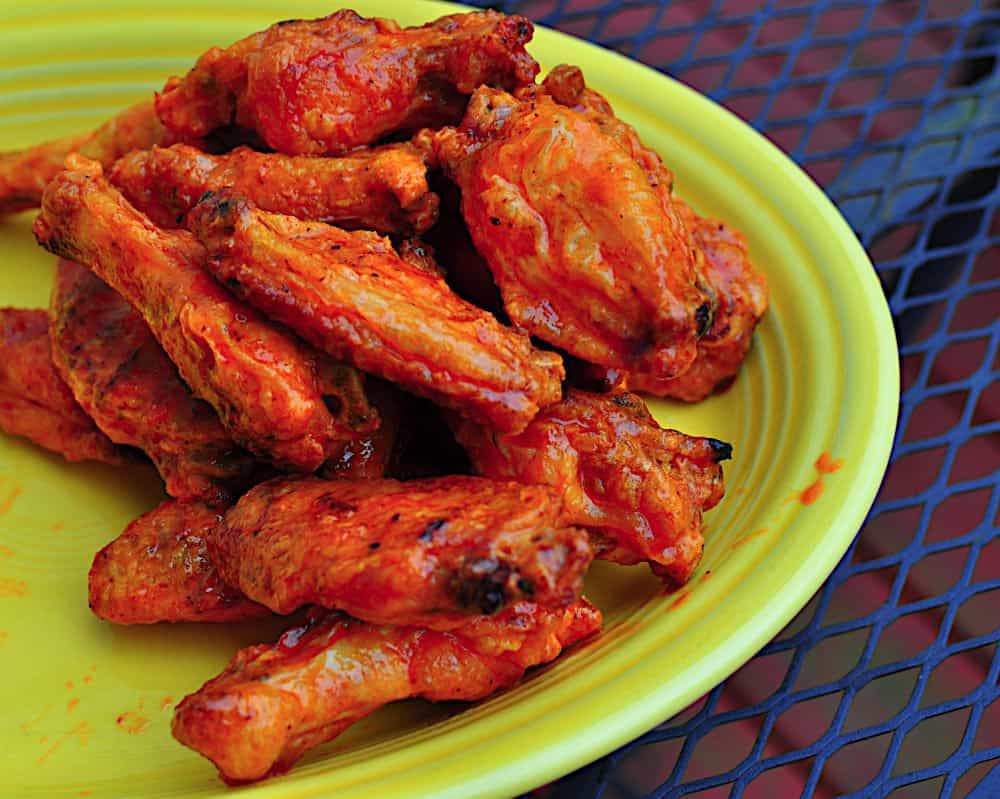 As I mentioned in Monday's post, J. Kenji Lopez-Alt is on a roll in his Food Lab series over at Serious Eats. A recent favorite of mine was his investigation into oven-roasted chicken wings. He wanted to make oven roasted chicken wings that were the same as deep fried wings, without the mess of deep frying.
*My favorite quote from the article: "I'd be willing to wager my negligible income that the Venn Diagram of people scared of frying and people who own well-seasoned cast iron woks looks like two non-overlapping circles." This is why I'm loving his posts - Kenji's combination of humor, obsession, food science, and pure geekiness makes my heart sing.

His answer, in a nutshell? Dry brine the wings for at least eight hours in the refrigerator, using a mix of salt and baking powder. All three of these things (the refrigerator, salt, and baking powder) help crisp up the skin on the wings. How? By drying the skin out, and increasing its alkalinity, you increase its browning. *Yes, increasing the alkalinity of a food helps in browning. And yes, I know my wife is the chemist in the family, and will probably want to correct everything I've just said.

So, why post this myself? Why not just link to Kenji's post and be done with it? Because, in perfecting oven baked wings, he missed something. Chicken wings taste better grilled then oven baked. I had to know - what if I tried Kenji's approach with my grill roasted wing technique?
*OK, I had to try out Kenji's baking powder trick as well - he had my curiosity piqued. Did it really matter?

Directions:
1. Dry brine the wings: Toss the wings with the kosher salt and baking powder in three batches - 1 teaspoon kosher salt, 1 teaspoon baking powder, and ⅓rd of the wings per batch. Spread the wings out on a sheet pan with a rack over it, so they aren't touching each other. Refrigerate, uncovered, for eight hours to 24 hours before cooking.

2. Prepare the grill: Set your grill up for indirect high heat cooking. For my Weber Summit, this means preheating for 15 minutes, then turning off all the burners except for the two outer burners (burners 1 and 6) which I leave on high.

3. Prepare the wing sauce: Melt the butter, then whisk in the Frank's Red Hot. 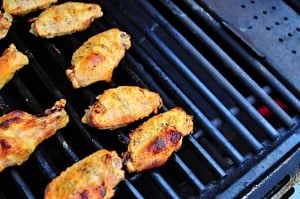 Variations:
*Smoked wings: To make the wings even better, smoke the wings while you're grilling them. I prefer to do this on a charcoal grill - add 1 fist-sized chunk of hickory wood that has been soaked for an hour to the coals.  If you really want to try this on a gas grill, soak 1 cup of wood chips for an hour.  Wrap the chips in an envelope of aluminum foil, poke a couple of holes in the top and put it over one of the lit burners on your grill.
*The problem is that gas grills need to allow a lot of airflow, so combustion gases can escape.  This lets the smoke escape as well.

*Nuclear sauce: If you want really hot wings, go with half Tabasco sauce, half butter. Tabasco has a lot more kick than Franks...

Notes:
*Chicken wings drip a lot of fat into your grill, and because of the indirect cooking, it won't burn away…until the next time you preheat your grill. Then you'll have a grease fire on your hands. I recommend making a drip pan out of aluminum foil, and putting it under the grill grate over the unlit burners. Or, the next time you cook, assume you're going to have to wait an extra ten minutes for the grease fire do die down while you're preheating.
time to clean my grill.