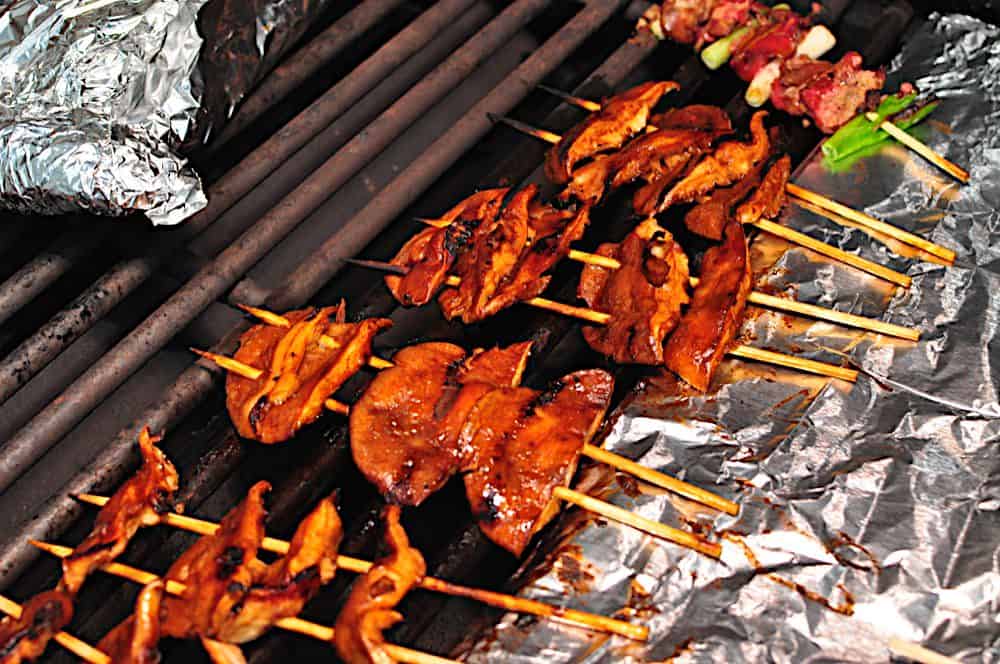 A vegetarian is coming to my cookout, and I'm grilling dinner. What do I do? Grab some mushrooms. Grilling is a great way to cook mushrooms; it enhances their "meaty" flavor.
*My apologies to any vegetarians out there. I don't know how else to describe the flavor. It's the umami; mushrooms are loaded with umami, and the best way to describe umami is as a "meaty" taste.
**At least, that's what Wikipedia says, so I'm sticking with it.

I usually grill portobello mushrooms; they are easy to grill (because they are so big) and the results are perfect to stuff a vegetarian burger. I had some shitake mushrooms lying around from my CSA, and needed to use them up. My sister, the vegetarian in the family, was coming for a cookout, so I grilled the shitakes for her. A few minutes after they came off the grill, she had cornered me, demanding the recipe for my brother-in-law. I tried one, and was amazed at the difference between the shitakes and the portobellos. Portobellos are thick, juicy, meaty. Shitakes are thin, crackling, crisp. Kind of like the difference between a burger and bacon.
*Again, I apologize to the vegeta...oh, I give up.

Here is a yakitori version of shitake mushrooms, grilled on skewers for ease of handling. Enjoy!

Adapted From: Tadashi Ono and Harris Salat, The Japanese Grill 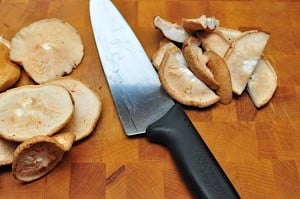 Directions:
1. Prepare the mushrooms: Skewer the mushrooms on the diagonal, so they'll lay flat on the grill, then put in a shallow dish. Lightly salt with the kosher salt. Whisk the soy sauce, olive oil and lemon juice together, then pour over the mushrooms. Let the mushrooms marinate while the grill preheats

2. Prepare the grill: Set the grill up cooking on direct medium-high heat. For my Weber Summit, I turn all burners to high and preheat the grill for ten to fifteen minutes. Then I brush the grill clean and turn the burners down to medium-high.

3. Cook the mushrooms: Put the mushroom skewers on the grill over the direct medium-high heat, and grill until browned on the bottom, about 3 minutes. Flip the skewers and grill on the other side until browned, another 3 minutes. Put them back in the dish with the marinade and turn once or twice to add another layer of the marinade. Put the skewers on a serving platter and serve.

Variations:
*Different citrus: use the juice of half an orange, or two limes, instead of the lemon.

*Mediterranean version: substitute 2 tablespoons of balsamic vinegar for the lemon.

Notes:
*Single or double skewer. Double skewers are easier to work with on the grill; they keep the mushrooms from spinning on the skewer when I flip them. But I had to be gentle while skewering the mushrooms; the second skewer would break the mushroom occasionally.

*Or, no skewer at all. Don't cut the mushrooms in half; marinate them and put them on the grill whole. Be careful when flipping them, you don't want one to slip through the grill grate into the fire.

Adapted from:
Tadashi Ono and Harris Salat The Japanese Grill