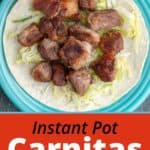 Carnitas are Mexican pork candy. Cubes of pork shoulder, simmered until tender, and then fried in their own rendered pork fat. Crispy on the outside, tender on the inside, I’ve tried Instant Pot Carnitas many times, but the results were not what I wanted...until now.

The problem was, I kept trying to make this a one-pot meal, and fry the pork cubes in the Instant Pot by simmering off the liquid. There were two problems. First, the pork would always burn on the bottom of the pot, no matter how carefully I watched it. Second, pressure cooker pots (like the Instant Pot) are not that wide - at best, I could fit 2 pounds of pork in a single layer on the bottom. That’s not enough to satisfy my hungry crowd of kids.

My breakthrough was giving up on the authentic, one-pot approach. Mexican kitchens cook carnitas in wide, shallow pots, so there’s plenty of room to fry the pork. Me? I brought out my frypan, and use vegetable oil or lard instead of the rendered pork fat. The Instant Pot does what it does best - quickly pressure cook the pork, making it tender and shreddable. Then I scoop the pork into the frypan, where there’s plenty of space to brown.

Are you looking for real-deal pork carnitas, crackling browned cubes of pork, tender and shreddable, in about an hour? Get out the Instant Pot and frypan, and get to work.