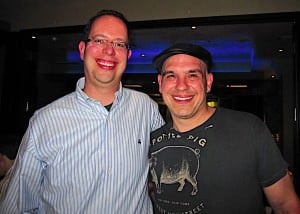 An Evening with Michael Symon

I went to Michael Symon's Greek cooking class on March 16th. It was an entertaining mix of fine dining, passionate pleas to cook for yourself and to buy quality ingredients, funny stories about being a TV chef, and nostalgia for growing up in Cleveland.

The classes are held upstairs at Lolita, Michael's restaurant in the Tremont neighborhood of Cleveland. They have half the room devoted to a demonstration kitchen, and the other half set up for white tablecloth dining after the class is over. It was just me, Michael…and 41 other students. He showed us recipes from the cookbook he wrote with Michael Ruhlman, Live to Cook

. While he's doing his demonstration, he explains how the recipe works, his theories about cooking, and answers any questions asked by the students.* Afterwards, there is a sit down dinner with the other students. We were all served the same dishes Michael demonstrated, with wines chosen to match, and a dessert from Michael's pastry chef.
*Actually, he'll explain just about anything, if you ask him. Dinner was late, because we kept getting him off on tangents. This was fine until he started cooking the keftedes (lamb meatballs). I didn't notice how late dinner was going to be until the smell of lamb in hot oil hit me. Even then I didn't want him to stop the stories he was telling, or the questions from the audience. His rapport with the class was amazing; we were just having a large, extended conversation about food, cooking, and celebrity.

Michael is amazingly genuine in person. He didn't become a chef to be famous; he started before there was a Food Network, or the concept of being a Celebrity Chef even existed. His love of Greek cooking (his mom is Greek) shone through; he gave a passionate explanation of Greek flavors, and how Greek cooking uses high acid components (lemon juice, red wine vinegar) to balance out rich foods.

Years ago, I attended a class that Michael gave, and it had some of the best cooking advice I ever heard. He said: "The key to cooking is learning how to salt your food." I was hoping for more advice like that, and boy, did he deliver. I was frantically scribbling in my notebook, trying to get down all the witty comments and interesting ideas he was throwing out to us.

What was his advice from this class that still sticks with me, days later?

"Cook to your own palette, to (the level of acidity, salty, fatty and spicy) what you like. Taste as you go, and adjust. Food changes, and you need to change with it."

"Vegetarians: I don't dislike them. I just don't understand them."
*He said the most annoying complaint he's received, recently, was: "The vegetarian selection at B-Spot wasn't very good." B-Spot Burgers is his new hamburger restaurant. "If you wanted vegetarian, why did you come to a hamburger joint?"

Michael now salts all his protein 6 to 24 hours ahead of time, after reading Judy Rodgers Zuni Cafe Cookbook, and trying out her early salting (dry brining?) techniques. At first, he just thought she was crazy: "Put the salt on the meat that early? It will dry out!". After testing it, he became a convert. He also says you have to bring meat to room temperature, or "take the chill off", from 15 minutes to two hours before cooking.  "If it's still cold in the middle, you have to hammer it with heat to get it cooked to medium. And the outside isn't good at that point."

There were lots and lots of questions about Iron Chef. He really respects Jeffrey Steingarten

as a judge, because he knows a ton about food, and never pulls any punches when he's judging. Michael says that "Jeffrey is the one judge that always, always catches me when I try to slip something by him."

But my favorite quote, when asked about Alton Brown

Thank you, Michael, for a fun evening!

And now, for our lucky winner of a copy of Michael's cookbook, Live To Cook

Random.org gave me number 5, which means that commenter rhonda is our winner! Congratulations!