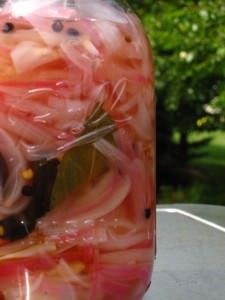 Pickled red onions are the one homemade pickle that I have made in the past. They're a common Mexican side dish, and I've often made them to serve with grilled Mexican meals.  Also, I used this recipe to preserve all the small red onions that came out of our garden last year.
*That's something you'll hear me say a lot this week - pickling is a great way to use the bounty of your garden. We're getting overrun right now, and pickling is a great way to preserve produce for later in the year.

My brother-in-law Travis made some pickled red onions while he was at our summer cottage, and I had them a about a week later on a hamburger. After that, I was putting them on my sandwiches for the rest of the week - they make a great sandwich topping.
*Thanks, Travis!

This recipe is an based on one from David Lebovitz, who I've mentioned before - David is "our man in Paris". I trust his information on food in the City of Light more than any other source.
*Oh, and his recipes happen to be great as well.  Especially if you love chocolate 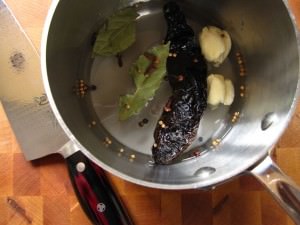 Pickling liquid - I put the garlic and pepper in...

Directions:
Click here for the basic technique of pickling vegetables.
1. Prep the vegetables: Put the sliced onions, crushed garlic and dried chile pepper in your jar. 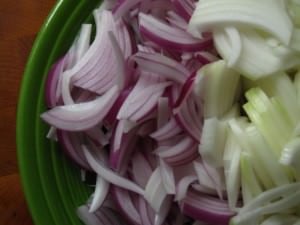 Variations:
*I used a mix of red onions and sweet (Vidalia) onions. It's traditional to use all red onions, but the sweet onions worked fine.  The only difference I noticed is that the red onions color the pickling liquid, giving the onions a garish red color; this color is a little muted in the batch in my pictures.  Next time I'm going to remember to buy enough red onions...

*Use different herbs and spices. David Lebovitz adds allspice berries instead of the coriander. *Slice the onions into 8 wedges per onion, instead of thin slices. This looks better for presentation, but I like the ease of use when you use thin-sliced onions.

*Add lime juice to the brine ingredients. This is also traditional in Mexico.

Notes:
*As I mentioned in the opening, this is a traditional side dish in Mexico; it goes great with tacos, especially beef tacos.

*I have found them useful anywhere you would use regular or grilled onions - they go particularly well on hot dogs or hamburgers, or as a side dish with grilled beef, chicken or pork. Lebovitz even recommends them as an addition to potato salad, which sounds delicious.

*Ideas for next time: I'm going to try some lime juice and water in the pickling liquid; this is the only recipe I've seen that uses 100% vinegar.