Filet mignon is all about texture. It comes from the tenderloin, a muscle deep in the ribcage of the cow, that doesn’t see much work. The result is smooth and tender meat.

The downside of being all about texture? Tenderloin is bland. It doesn’t have the big, beefy flavor of other, more active muscles. I’m fixing that with an oak plank and blue cheese.

I serve the beef on top of a spring mix salad with blue cheese dressing - I love the bitter greens with beef - and topped the steaks with some of the blue cheese as a finishing touch.

The plank smokes the beef while it protects the thick steaks from the heat of the grill. My kids, who aren’t steak fans, were all over this one. I think the wood smoke sold it - tastes like bacon, they said. I tried to explain that it wasn't really a bacon flavor, and the difference between hickory and oak smoke.  They stopped paying attention, like they always do when I start rambling on about cooking.
What’s that? You already stopped paying attention too? Sorry. I’m done. Here’s the recipe.

Put the plank in a large container, weigh it down, and cover with water. Soak for at least one hour, or up to overnight.

Sprinkle the filet mignons evenly with the salt and pepper. Let rest at room temperature for one hour, or up to overnight, refrigerated.

3. Set the grill up for indirect high heat 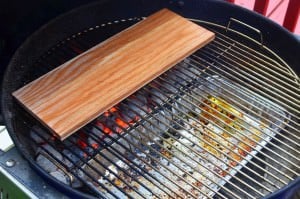 While the grill is preheating: in a large bowl, whisk the sherry vinegar, ground black pepper, and olive oil until they emulsify. Add the blue cheese and cranberries, then dump the spring mix on top. (Don’t toss the salad yet - wait until the steaks are cooked.)

When the grill is ready, remove the plank from the water, letting excess water drip off. Put the plank directly over the lit part of the grill, and leave it until it just starts to smoke. Move the plank to the unlit side of the grill, flip the plank over so the smoking side is facing up, and put the tenderloins on the plank. Cook with the lid closed until the tenderloins reach an 120°F internal temperature for medium-rare, about 20 minutes. (For rare, cook to 115°F; for medium, cook to 125°F) 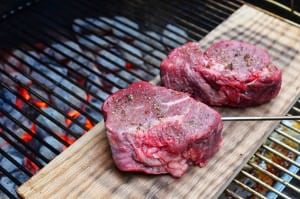 Move the steaks from the plank to the direct heat side of the grill, with the undercooked side that was touching the plank facing up. Sear the steaks over direct high heat until browned on one side, about 2 minutes, rotating (but not flipping) after a minute to get a diamond pattern of grill marks. Remove the steaks to a platter, and immediately top with the blue cheese. 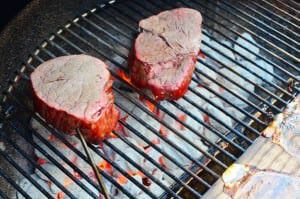 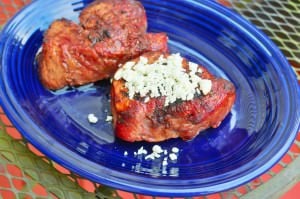 Let the steaks rest for 10 minutes. Toss the salad, slice the steaks, then serve by putting a big pile of salad on a plate, and topping with the sliced steak. 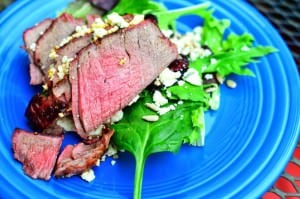 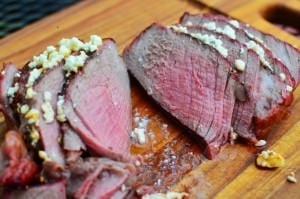