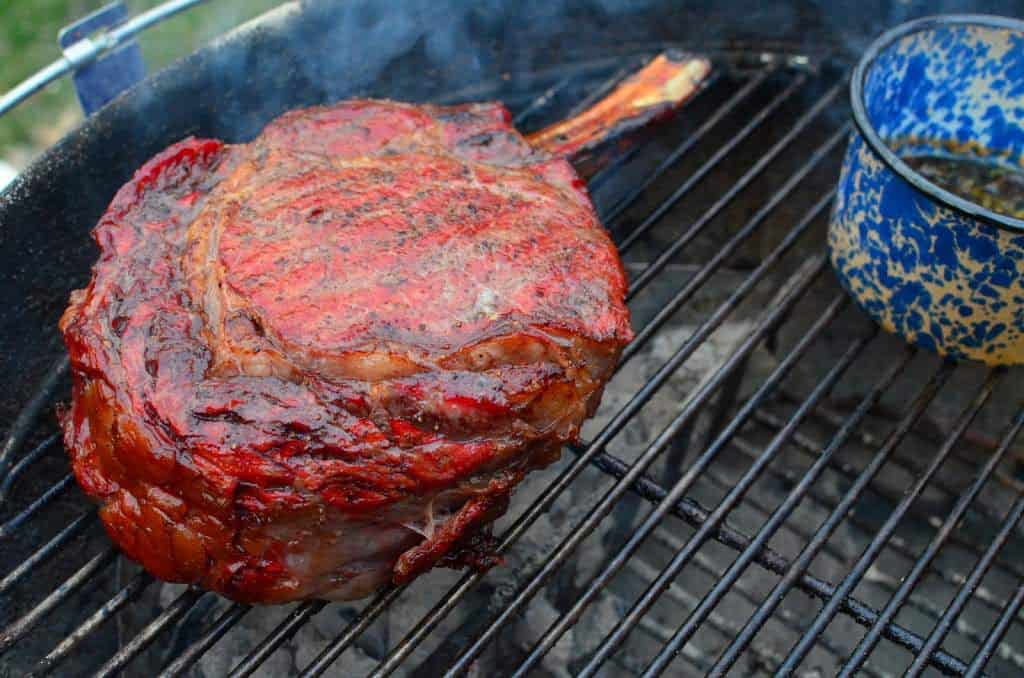 When I saw the picture of the cowboy chop, I fell out of my chair. I was on the phone to my butcher immediately. I had to grill one. Had to!

The cowboy chop is a monster ribeye steak. 2 ½ inches of beef, trimmed, with the bone cleaned off so it looks like a large comma. This one steak fed my family of five, with leftovers for a steak sandwich during the week. Because, really, this isn’t a steak. It’s a small rib roast. I mean, look at that thing.

Now, how to cook this gigantic piece of meat? I’ve always been a sear and move guy. Sear the steak first, then slide it over to the cool side of the grill and let the temperature come up slowly.

The problem is, all my food science heroes say I’m doing it backwards. Reverse sear is the way to go - start over low heat, gently bring the meat up to temperature, then finish it with a blast of heat to brown it. Alton Brown, Shirley Corriher, Nathan Myhrvold, Kenji Alt, and Meathead Goldwyn all recommend this approach.
Of course, their “low and slow” method varies, from a low oven in Alton’s case, to freezing the steak in Modernist Cuisine at Home. I’m sticking with a grill-only method, recommended by Kenji Alt, even though bubba sous vide was a tempting alternative.

Why does the reverse sear work better? Two reasons:

In spite of knowing all this, the reverse sear scared me. It’s different from the cooking method I’ve always trusted, and I didn’t want to mess up this gorgeous piece of beef.
Special thanks to Sherman Provision, my local butcher. This was a special order, and Michael let me come back and pester him about how to cut it.

The reverse sear instructions are easy - bank the coals to one side and start the steak on the other side away from the heat. Cook the steak with the lid closed, flipping often, until the temperature is ten degrees lower than the final temperature. (115°F for medium rare). Then, move the steak directly over the lit coals to give it a final sear.

I did have to display adaptability as I was cooking. I had a couple of problems during my reverse sear:

Even with those problems, I’m going to use this technique again. The beef was pink from edge to edge. No gray ring of overcooked beef between the crust and the core, just medium-rare deliciousness. And the low and slow cooking results in extra tender meat; this ribeye chewed like beef tenderloin.

I’m going to play around with this technique some more; it should work great with thick cut steaks, even if they aren’t as cartoonishly thick as the cowboy cut.

Two hours before grilling, remove the steak from the refrigerator. Season it liberally with the salt and pepper. Let it rest at room temperature until it is time to grill. 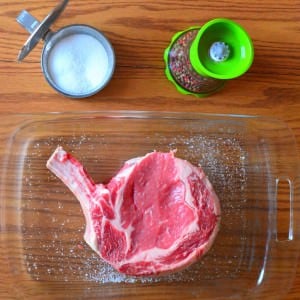 Set the grill up for indirect medium-low heat, 300°F. On a charcoal grill, light half a chimney of charcoal (50 coals), wait for the coals to be mostly covered with gray ash, then pour them on one side of the grill. Add the smoking wood to the pile of coals. 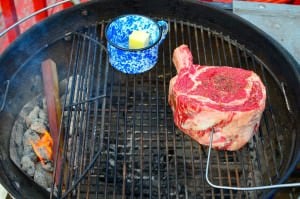 3. Start the steak on indirect medium-low

Put the steak on the grill over indirect heat, away from the lit coals. Close the lid, and position the air holes directly over the steak to pull the smoke towards it. Cook the steak, flipping every five minutes, keeping the lid closed as much as possible. The steak is ready for searing when it reaches 115°F internal in the thickest part, somewhere between 30 minutes and 1 hour. (115°F is medium rare. Cook to 105°F to 110°F for rare, 125°F for medium. Beyond that…buy a thinner steak.)

Start another half a chimney of charcoal (another 50 coals) for the searing step after the steak has been cooking for 15 minutes, or when it reaches an internal temperature of 80°F. (Do this on a heat safe surface. I used my other charcoal grill - doesn't everyone have two kettles?) 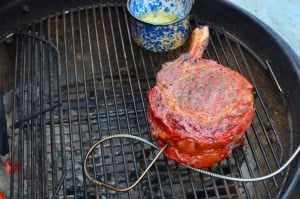 While the steak is cooking slow and low: Put the butter, shallot, and thyme in a small, grill safe pot. (I use an enameled steel drinking cup.) Put the pot over the coals when you start the steak in step 3. Check the butter every time you flip the steak - once the butter is melted and the shallots are sizzling, slide the pot to the indirect side of the grill to keep warm.

(If you don’t have a grill safe pot, heat the butter baste on the stove over medium heat, or put everything in a Pyrex measuring cup and microwave. Heat the baste until the butter melts and the shallots sizzle.) 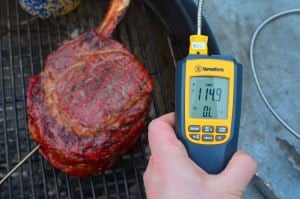 By now, the second chimney of charcoal should be covered with gray ash. Add it to the coals already in the grill, pouring carefully so the steak doesn’t get covered with ashes. Brush the steak with a thin coat of butter, then slide it directly over the lit coals. Sear the steak with the lid open, flipping and basting with the butter every minute or two, until there is a gorgeous brown crust on the steak. This should take about five minutes, at which point the steak should measure 125°F internal for medium rare, 115°F for rare, or 135°F for medium.

Remove the steak to a platter and baste it one last time with the butter. Let the steak rest for fifteen minutes, then slice and serve. 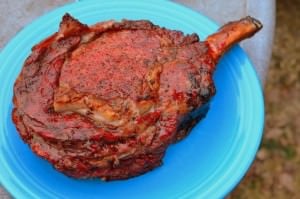 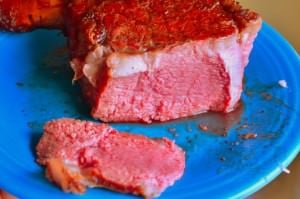