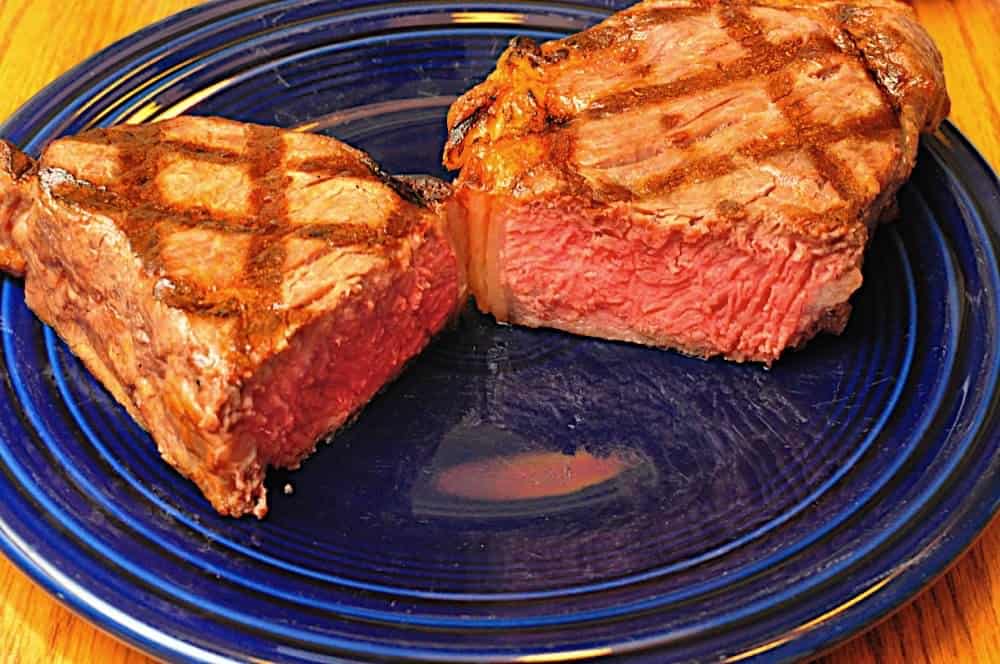 I've been reading about the magic of sous vide cooking for a while now. Chefs have been using the technique for years; it lets them cook food to a very specific level of doneness, using a water bath with an immersion circulator. If they want a steak cooked to perfect medium-rare, 128*F, they set the immersion circulator to 128*F, seal the steak in a vacuum bag, and put it in the water bath. The steak cooks all the way through to the temperature of the water, and stays at that temperature for as long as it is in the water. When the chef is ready to cook, they unseal the bag, sear the steak, and serve it. Voila - perfect medium rare from edge to edge.

aren't cheap; professional models are out of the price range of home cooks. (Or at least this home cook.) Sous Vide Supreme

came out with a model for home cooks last year - it is tempting, but at $500, I've been able to resist temptation so far.
*I'd love to get one, but I couldn't justify the $500 price tag, and the kitchen space it will use. I love my gadgets, but this seemed like a gadget too far.

Then, Kenji Lopez-Alt had a brainstorm. Instead of an immersion circulator and a vacuum sealer, he filled a beer cooler with hot water, and used a zip-top bags. The cooler traps the heat, keeping the temperature of the water steady enough to use as a sous vide water bath.

Kenji's Beer Cooler Sous Vide was a hack worthy of McGyver, and I loved reading about it. I put it on my "I need to try that" list, and...promptly forgot about it. That is, until I went grocery shopping for Valentine's Day dinner. My local grocery store had a great deal on thick cut New York Strip steaks. I grabbed a couple, then wondered how I could cook them to a perfect medium-rare.  (Perfect medium-rare is my quest.*  And it's tough with thick cut steaks.) Kenji's technique popped back into my head, and I knew what I had to do.
*My greatest shame is presenting my mom with a steak that is not rare. For all my skill as a cook, I have a problem with overcooking beef. What can I say? I get distracted sometimes. I was hoping a side effect of this technique would be more consistent results. It is easier to measure the temperature of a cooler full of water than it is a thin steak.

The process is simple: fill a beer cooler with water about five degrees higher than the temperature you want the steak to finish at, because the temperature will drop slightly. Season the steak, then put it in a zip-top bag, and seal the bag most of the way shut. Slowly lower the bag into the water to force out the air. Once the bag is almost all the way submerged, seal the top and close the cooler. Let the steak sit in the water bath for at least one hour, to cook all the way through to the temperature of the water.
*Timing isn't critical - the steak can't get hotter than the water, so it can not overcook. This is part of the beauty of the technique.

Remove the food from the bag, pat it dry, then sear on ripping high heat. I go two minutes a side, rotating 90 degrees after one minute to get a diamond pattern of browned crust on the meat. It doesn't need any more cooking than that; it is already cooked to the doneness you want by the water bath.

Instead of searing in a fry pan, I got my grill as hot as I could, then grilled the steaks for 2 minutes a side. I had nice browning, an impressive set of diamond grill marks. And the results? Oh...the results...Ohhhh...
*Sorry, give me a moment. I'm overcome by the memory.

This was, bar none, the best thick-cut steak I've ever cooked. An inch and a half of perfectly pink beef from edge to edge, with a thin browned crust on the outside. Not the usual gradation of red in the middle,  through shades of pink, then gray and overcooked, before getting to the brown crust. This was medium rare from one side to the other. And, tender? The long, slow cooking in the water bath leaves the juices in the meat. They don't get squeezed out during the cooking time. The result is buttery beef, the likes of which I've never made before.
*I can't wait to try this technique with prime grade beef. Or rack of lamb. Or a thick cut pork chop. Oh, and about that Sous Vide Supreme? Darn it, now I'm lusting after one.

Are you a home cook looking to try something out of the ordinary? Have you been on a quest for a perfectly cooked piece of beef? You have to try this out. Thank you, Kenji!

Adapted From: Kenji Lopez-Alt Cook Your Meat in a Beer Cooler [SeriousEats.com]

Directions:
1. Cook the steaks in the beer cooler water bath: Fill a large cooler with 132*F water. (I fill the cooler most of the way with hot tap water, then add boiling water until I get to 132*F). Sprinkle the steaks evenly with the salt and pepper. Put each steak int its own zip-top bag. One at a time, slowly lower the bags into the water, letting the water push the air out of the bag and seal itself around the steak. When the bag is submerged to the level of the zip, seal the bag, then let it sink into the water. Close up the cooler and cook the steak in the hot water bath for at least an hour.
*If you are cooking for more than two hours, check the water temperature and add boiling water occasionally to keep the temperature between 125*F and 130*F.

2. Prepare the grill: Set the grill up for cooking at high heat; as high as you can get it. For my Weber Summit, I turn all the burners to high, let the grill preheat for 15 minutes, then brush the grate clean with my grill brush.

Notes:
*I cooked these steaks on my gas grill because my charcoal grill (and deck) are covered with mix of snow and ice that I haven't been able to break through. I would much rather use charcoal for my searing; the high, dry heat of charcoal will brown the meat much better than gas. I'm going to use a full chimney of charcoal, piled two coals deep over half my charcoal grate to create a very high heat searing zone.

*February in my house can't be described as warm, which gave me a couple of obstacles to overcome. The hottest water from my tap was only 115*F, so I added boiling water to bring the temperature up.  (Luckily, my electric kettle

boils water very quickly.) My house was also very cold; according to my Thermapen, the air temperature in my kitchen was 62*F. I did a dry run (wet run?) with the cooler and two gallons of water, and the temperature dropped ten degrees in two hours. I added a lot more water the second time around, filling the cooler completely, and trusted the extra thermal mass to keep the temperature up. I started the steaks in 133*F water; after an hour and a half the water was down to 126*F. I think the water bath can hold the steaks longer in the summer; in the winter I would be ready to grill after no more than an hour of cooking in the water bath.

*Another advantage to this technique is the brining effect, caused by seasoning the steaks before they are cooked in the water bath. I forgot the pepper - these steaks were just beef and salt, but they were seasoned all the way through.

*I'm really excited by this technique. Can you tell? I thought this would be a cute trick, something to try once; instead, I've been thinking about these steaks ever since I ate one, and I can't wait to try this again.

Adapted from:
Kenji Lopez-Alt Cook your meat in a beer cooler [SeriousEats.com]

*Enjoyed this post? Want to help out DadCooksDinner? Subscribe using your RSS reader or by Email, recommend DadCooksDinner to your friends, or buy something from Amazon.com through the links on this site.  Thank you!