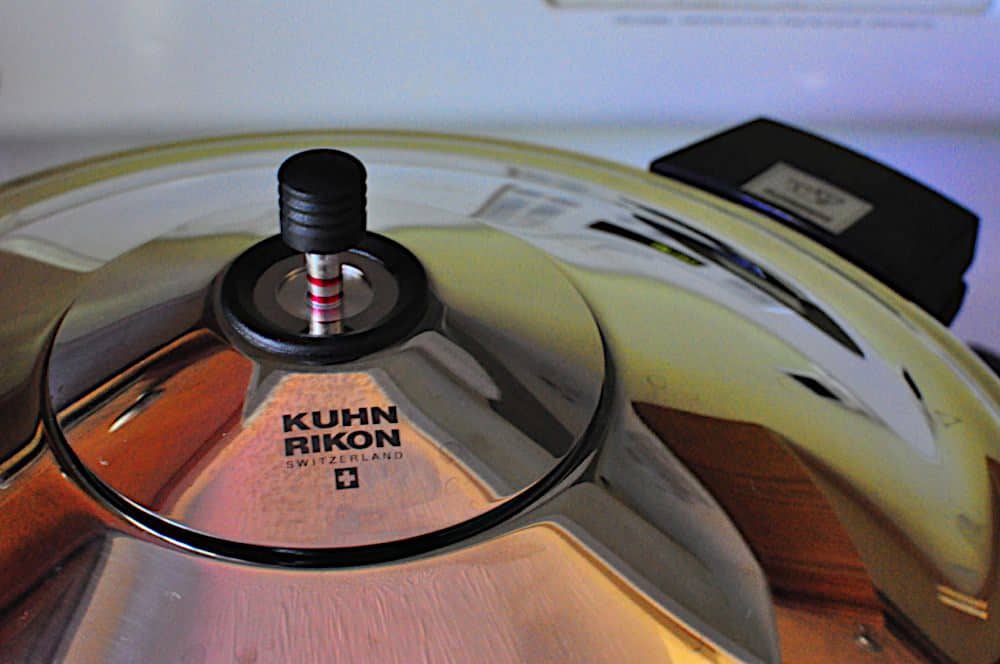 . Someone at Kuhn Rikon read that article, and they offered to send me one for a review. I couldn't say "YES!" fast enough.

I have been a pressure cooker fan for close to a decade now, and I have heard about the quality of Kuhn Rikon pressure cookers. They are true second generation cookers, made in Switzerland, and are built really, really well. The Family Stockpot 12 quart cooker they sent me is no exception. It is huge, solid, and fits together like (excuse the allegory) a Swiss watch.
*Also, the ½ and ⅔rds fill lines are marked inside the pot, which is a "why doesn't everyone do this?" feature. Pressure cookers need head space to come up to pressure. They shouldn't be filled beyond ⅔rds full. Why doesn't everyone make that level obvious?


Why does size matter so much with pressure cookers? If a pressure cooker is over ⅔rds full, there isn't enough room in the cooker to build up pressure. Because of this ⅔rds rule, a bigger pressure cooker is almost always better. This 12 quart cooker is as big as they get; it is 2 quarts bigger than my current cooker, the 10 quart Fagor Duo

. The extra 2 quarts translates into 1 ⅓ quarts of usable space, and I always want more space in my cooker. The Kuhn Rikon swallowed two gallon bags of frozen chicken pieces when I made stock for my first test run, and looked like it could take two more.  I made large batches of food with all my tests, and I still wasn't filling this cooker to its limit.  I don't think I'll need to break apart my turkey carcass when I make my annual batch of turkey broth at Thanksgiving - the Family Stockpot cooker is that big.

Space isn't just about volume; width is also important. Every pressure cooker I've used, until this one, was very narrow. I think it is the nature of pressure cookers - it's easier to build them if the column of air they are pressurizing is narrow. The Kuhn Rikon Faimly Style is 11 inches wide. That extra surface area is a big help; it has as much space as my frypan for browning. My Fagor pressure cooker is only 10 inches wide, and is noticeably more narrow. All the other 8 inch wide cookers I've used are tiny in comparison. This is a big advantage of the Kuhn Rikon.
*And I think it explains why the Kuhn Rikon Family Style cookers cost as much as they do. That extra width must increase the pressure, and requires a stronger cooker. But we'll get to my cost-benefit analysis later.

Finally, there is a second generation, spring loaded pressure valve on the cooker. The spring loaded valve has two lines on it, and when the second line comes into view, the cooker is up to pressure. This is a much better pressure indicator than I have on my current cooker, which uses escaping steam to let you know it is up to pressure. With the Kuhn Rikon, there is no release steam unless it is over-pressurized, and needs to release some of that pressure.  In other words, there is no more hissing! I loved how quiet this cooker is.

And...I keep hearing how that lack of escaping steam is a good thing when it comes to flavor. Heston Blumenthal, the molecular gastronomist behind the Fat Duck restaurant, swears by his pressure cooker. Heston says that sealed pressure cookers give you better flavor in your food. His explanation goes like this: when you cook something uncovered on the stove top, your kitchen smells great; this is a bad thing, because it means the flavor compounds are escaping into the air. The sealed environment of the pressure cooker traps those flavor compounds, and letting the pressure come down naturally gives them time to settle back into the meal. This means the Kuhn Rikon (and any true second generation pressure cooker that doesn't release steam) should have a flavor advantage over pressure cookers that allow steam to escape while they are cooking.

I haven't had a chance to do a side by side tasting of stock, comparing the two cookers I have; that's my project for Thanksgiving, when I'll have a bunch of turkey carcasses to work with. I can say that my test recipes tasted great, and the pork chili I made in the Kuhn Rikon had a richer, porkier taste than any other pork stew I've done in a pressure cooker.
This will obviously take more research and tasting. Yum!

As you can probably tell, the Kuhn Rikon was passing my tests with flying colors. Is it perfect? No. There are a few minor quibbles I have with it.

The second quibble is the Kuhn Rikon isn't a fully clad cooking pan, like my favorite All-Clad pans. It has an aluminum disc on the bottom; the aluminum doesn't come up the side walls of the cooker. That said, it browned meat very well in my tests. The browning was even, and not too quick; it wasn't quite as good as my All-Clad frypan, but it was certainly good enough. Besides, whenever I have to brown a lot of meat I use both the cooker and my frypan so I can brown two batches at once.
I don't think I'm ever going to see a fully-clad pressure cooker. A fully clad pot costs about as much as a similar sized pressure cooker. Combining cladding with a pressure cooker lid seems like it would be very, very expensive. And speaking of cost...

The final issue is the cost. This is not a cheap piece of cookware; it lists for north of $400. I've always wanted one, but it is expensive enough that I would always think "I'll save up for it later." Now that I've used it, I love it. It is definitely worth the money. The volume, width, build quality, and second generation pressure valve make it worth the extra expense.
If I had to give it back, I'd be buying myself one. I am already used to the extra space it gives me; my other cookers look puny in comparison. And it's so quiet!

If you just can't spend the $400, I would definitely look at the narrower Kuhn Rikons. I was impressed by this cooker's performance, and the advantages of the build quality and second generation pressure valve are available in their less expensive models. If you love pressure cooking (like I do), the extra width and space in the Kuhn Rikon Family Stockpot 12 quart cooker make it a great value for the money.
*If you're looking for something smaller, instead of cheaper, I would check out the other Family Style models - the 5 quart braiser

models have the same 11 inch width as this cooker. 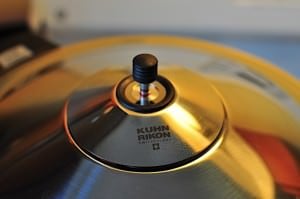