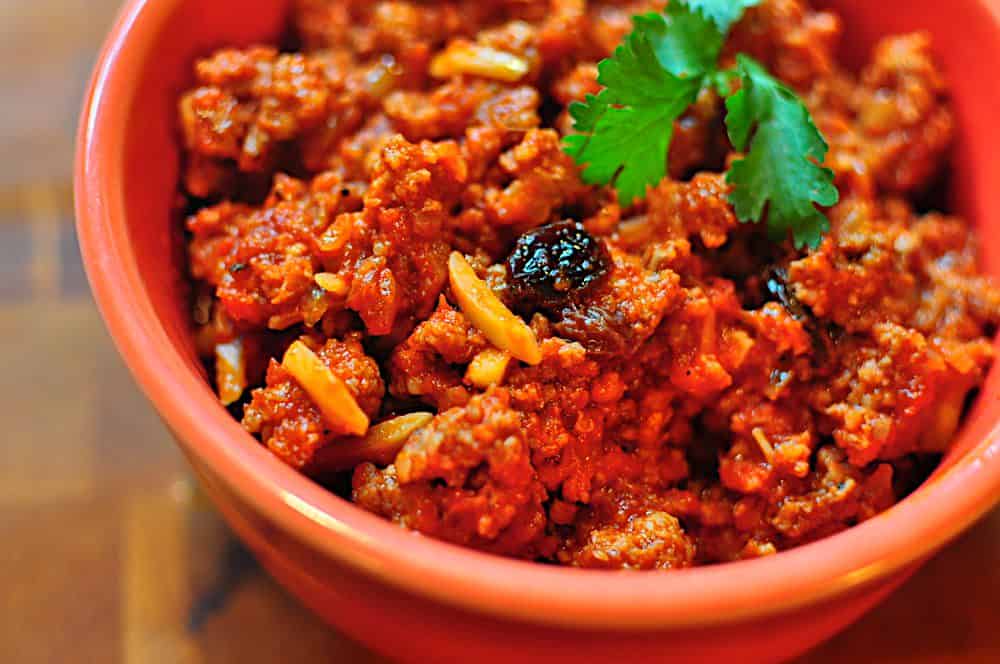 Picadillo. I think this is where the travesty known as taco seasoning mix came from. Picadillo is common in Latin American cuisines; ground or finely minced meat, cooked with spices and tomato or tomato sauce, used to make a filling for tacos or to serve with rice.

We took that and turned it into a filling for hard-shell tacos, a packet of spices to rip open and pour over ground beef.

Now, taco seasoning mix is a travesty, but not because of the results. I fondly recall that seasoned ground beef mix of my youth.*
*Sitting there in the bottom of a taco shell, waiting. Waiting for that first bite. That first bite would shatter the taco shell and dump the greasy beef, cheese, tomatoes, and a few shreds of lettuce down my arm. Ah, memories.

My gripe is with that 1.25 oz package of spices. I hate pre-made spice blends. I really hate calling this a spice blend at all. According to the package, the first three ingredients are yellow corn flour, salt, and maltodextrin. Starch, salt, and more starch? That's what I'm paying for?

I wanted an authentic version. And I found it, as usual, in one of Rick Bayless's recipes. The first time I made picadillo was as a filling for empanadas. Empanadas are a delicious pain in the butt - rolling out the dough, filling with picadillo, and deep frying is a project. I had fun doing it with the kids, and I'll do it again someday. But the picadillo filling was a revelation. It was the grown-up version of that taco seasoning mix - without the seasoning mix. (And with some raisins and almonds thrown in.) Picadillo is now my favorite way to use ground pork.
*This recipe is also inspired by my CSA with Brunty Farms. I bought a couple of pounds of ground pork, and Melanie mentioned people always ask her what to do with it. I blurted out "Tacos!" Then I realized the recipe wasn't on my blog... 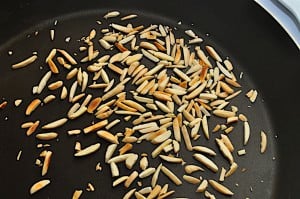 2. Saute the aromatics and spices: Add 2 tablespoons vegetable oil to the frypan, increase the heat to medium-high, and heat until shimmering. Add the onion, sprinkle with ½ teaspoon kosher salt, and saute until just softened, about 5 minutes. Make a hole in the center of the onions and add the garlic, ancho chili, oregano, black pepper, cinnamon, cocoa powder, and cloves. Toast the spices for one minute, then stir into the onions. 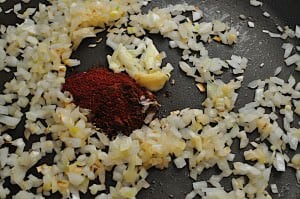 3. Cook the pork: Add the ground pork to the pan and break it up. Sprinkle with 1 teaspoon of kosher salt. Cook, occasionally stirring and breaking up the pork, until the pork has lost its pink color, about 5 minutes.

4. Simmer until ready: Stir in the crushed tomatoes, vinegar, brown sugar, and raisins. Bring to a boil over high heat, then reduce the heat to a simmer and cook until the tomatoes thicken up, about 20 minutes. Stir in the almonds, then taste for seasoning and add more salt and black pepper if necessary. 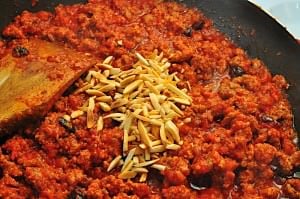 Variations:
*Up the heat level: Replace the ancho chile powder with 1 tablespoon chipotle en adobo puree. 2 tablespoons if you really like it hot.

*Turkey, Chicken or Beef: Any ground meat will work, not just pork.

Notes:
*I use this as a taco filling, but as I mention in the opening, Rick's original recipe used it to stuff empanadas. Recipe here: Empanadas de Picadillo [RickBayless.com]

I like to cross culinary streams and make lettuce wrap tacos with picadillo and rice. Not very authentic, but it tastes delicious.

This recipe makes a lot of picadillo. That is intentional; picadillo freezes well. I serve half of it, then freeze the other half in a quart container. A quick run through the microwave, some tortillas, and I have a second dinner.

« Duma Meats and Farm Market
Video: How To Butterfly A Chicken »