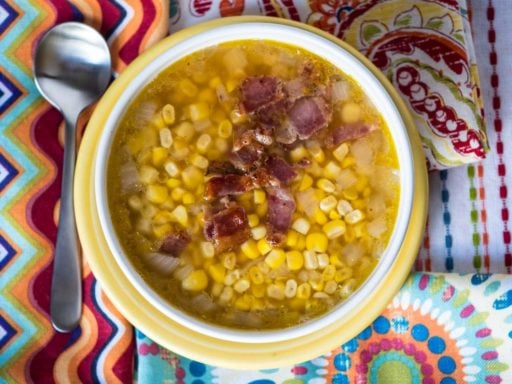 I live for fresh corn on the cob in the summer – I’m a Midwestern boy, born in Wisconsin and raised in Ohio. At the start of corn season, I’m a minimalist – boiled (for exactly 4 minutes!) or grilled are the only two ways I will make corn. In other words – don’t mess it up, and let the corn flavor shine through.

As happy as I am with simply cooked corn, as August passes and we begin September, I start to want some variety. What can I do that is different, but still does justice to fresh corn?

Pull out my trusty pressure cooker, that’s what. 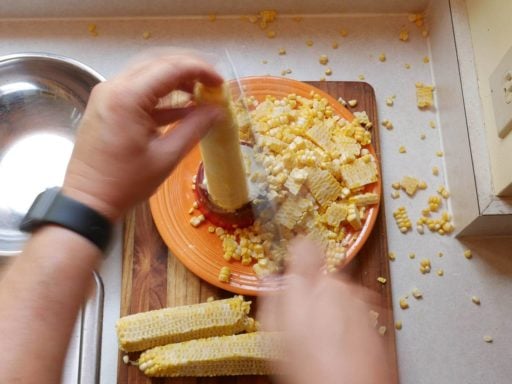 Cutting the kernels from the corn

I could not believe how much corn flavor the pressure cooker extracts from corn cobs. This is summer in liquid form. I don’t want to mess it up, so I keep the rest of the ingredients simple – a little bacon, a sautéed onion, and salt and pepper. Everything goes back in the pot for a second blast of pressure to cook the corn kernels, and I have a soup that is the essence of corn.

Now, I use bacon in this recipe, because…well, because bacon. I love the salty, smoky undertone it adds to soups and stews. If you really don’t want to add bacon, substitute 2 tablespoons of butter.

Pressure Cooker Corn Soup recipe. Liquid summer in a bowl – made with fresh corn cob broth in the pressure cooker.