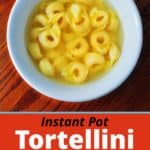 Sorry about the heavy rotation of pressure cooker recipes. The stomach flu flattened us. A simple broth and pasta soup is all I can handle right now.

When I make soup, more is better. Everything goes in the pot. What do I have in the refrigerator and pantry? Onions, celery, carrots, peppers, cabbage; noodles, rice, leftover chicken, beans, some sausage. Add it all to the soup pot. Throw in some herbs and spices for good measure. Simmer until the flavors mingle, taste for seasoning, then serve.

Tortellini en Brodo is minimalist soup. Clear broth and noodles stuffed with cheese, it is as simple as soup gets.

Simple doesn't leave any place to hide. The broth has to be good for this soup to have any chance. And homemade broth is so far from canned broth that you can see the curve of the horizon.

That's where my pressure cooker comes in. It gives me great brodo in about an hour. A mix of beef and chicken adds depth to the simple broth, and a parmesan rind gives it a hint of funk. The ground beef? It acts like the raft does in a consomme, clarifying the broth while it cooks.

For the tortellini, homemade would be best…but I've never learned rolling skills, and don't have an Italian grandmother to teach me.

So, next best is from your local Italian market. They'll have tortellini, probably homemade by someone's Nonna, frozen and ready for you.

If you're stuck, grocery store tortellini is acceptable. I like Barilla dried tortellini, or Butioni fresh tortellini. Homemade broth makes up for average tortellini.

No pressure cooker? No worries. See the notes section for stovetop and slow cooker broth instructions.

*Enjoyed this post? Want to help out DadCooksDinner? Subscribe to DadCooksDinner using the RSS or Email options on the right, link to this post from your blog, recommend DadCooksDinner to your friends, or buy something from Amazon.com through the links on this site. Thank you.

« The Loneliness of the Midwinter Blogger
Rotisserie Chicken With Fennel, Coriander, and Red Pepper Spice Rub »