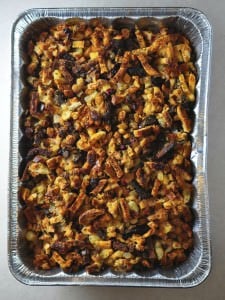 I need four things on Thanksgiving.

Oh, and a glass of wine or two. Everything else is nice; those four are mandatory, or it’s just not Thanksgiving.

Here is number four – the simple stuffing recipe that I use for Thanksgiving, loosely based on a recipe Pam Anderson published years ago. When I hear “stuffing”, this is what I expect to see, more or less. More important, it’s what my family expects.

Thanksgiving’s essential side dishes change, depending on your location. My friend Deborah down in Austin swears this should be called “dressing”, and made with a mix of corn bread and bread crumbs. Maybe next year I’ll get adventurous and try that on Thanksgiving, but I’m worried about backlash – an angry mob of stuffing-deprived aunts and cousins, wondering where the “real” stuffing is.

Why cook this in the rotisserie? On Thanksgiving, my oven is always full. I’m using the grill, which is already fired up to cook the turkey, as an oven substitute. With the turkey suspended from the rotisserie, it is easy to slide the pan full of stuffing in when there is about an hour left to cook.
*Normally, I’m a charcoal snob, but this recipe works better on the gas grill. The even heat of the gas makes a great oven substitute. The charcoal grill tends to burn the stuffing around the edges and under cook the stuffing in the middle.

If you’re not as obsessed about rotisserie cooking as I am, ignore the rotisserie instructions. Bake the stuffing at 350°F, as described in the “Notes” section. 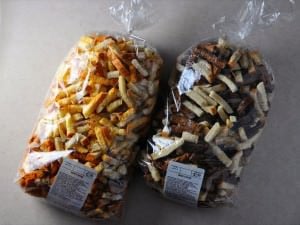 1. Saute the aromatics
Melt the butter in a large frypan over medium-high heat. Add the onions, celery, apples, and garlic, then sprinkle with 2 teaspoons of kosher salt. Saute until the onions are soft, about five minutes. Stir in the thyme and sage, and cook until you smell the herbs, about another minute.

2. Mix the stuffing
Put half the bread and the cranberries in a large mixing bowl. Scrape the onion and celery mix from the frypan into the bowl, then stir until evenly mixed. Pour in half the chicken stock, add the salt and pepper, and stir until all the bread is damp. Add the rest of the dried bread and stock in batches, when the mixture has compacted enough to add more bread. Stir in the beaten egg, then pour the stuffing into the foil pan. 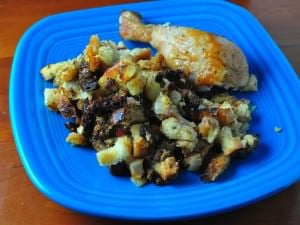