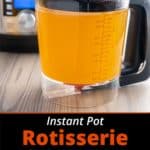 I like the flavor of a browned chicken broth, the extra flavor that a roasted chicken adds to the broth. (Not that there’s anything wrong with a blonde chicken broth - sometimes I just buy a pack of frozen chicken backs when I need a cheap broth fix.) But the rotisserie chickens are always waiting for me, lined up and waiting by the entrance to the grocery store. (And, if you have a Costco membership, you already know about their rotisserie chickens. Unfortunately, my nearest Costco is a 45 minute drive, so a membership does not make sense for me.)

Pressure cooking makes - dare I say it - a better broth than traditional stovetop cooking. It forces the flavors and gelatin out of the chicken bones and in to the liquid, and it does it in an hour under pressure, instead of having to simmer all afternoon. The other advantage is the sealed environment - instead of the flavor escaping into the air as it simmers, the pressure cooker traps the flavor molecules in the pot, where they condense and drop back into the broth as the cooker cools down. (That’s why I recommend a natural pressure release with broth. It keeps more of the flavor in the broth.)