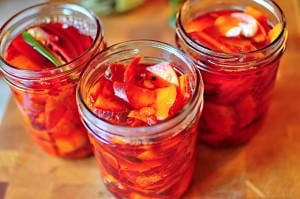 Last year, I made refrigerator pickles from a whole range of CSA and farmer's market vegetables. I loved having the the pickled peppers and zucchini for a few months after their season was over.
*I would have loved the dilly beans, but Diane ate them all before I could get to them.

Unfortunately, the pickles started to go after a while - they were only refrigerator pickles. After a few months, the few remaining jars were cloudy, and I figured they were not safe to eat. With a tear in my eye, I had to dump my last two jars of zucchini pickles.
* I've read that refrigerator pickles are safe for anywhere from three weeks to three months...but not longer than that.

This year, I decided to extend my pickle season by truly canning them, so they would be preserved. I started reading up on canning, and found that pickles are good for canning - the brine has a lot of acid, which helps preserve them. I already had most of the equipment - canning jars, a large pot, and a canning funnel. Sites like Food in Jars and Saving the Season inspired me with their photography and recipes. And, in the back of my mind were Mexican carrot pickles.

A few years ago I ate at Mi Pueblo in Cleveland. The dinner was good, but what really grabbed me were the pickled Mexican carrots that were put on the table as we arrived. They were a revelation - the sweetness of carrots, pickled, with a big hit of heat, Mexican style. When I decided it was time to start canning, this was my starting point. I picked up a few bunches of regular and purple carrots from the Cuyahoga Valley farmers market, and went to work.

For my first attempt at canning, the results are encouraging. All my jars sealed properly, and the first batch tastes delicious. But...if you don't feel like canning, that's OK.  Make these carrots as refrigerator pickles.  They'll keep for a month or two, and I'll be surprised if they last that long.

Ingredients:
This recipe makes four pints of pickled carrots, and scales up easily 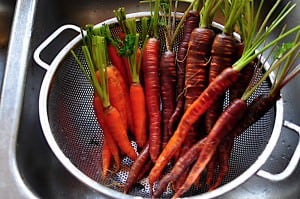 Directions:
For an overview of boiling water canning, see the Principles of Home Canning or pick up a copy of the Ball Blue Book

1. Prep the ingredients: Trim the carrots, then slice into ¼" thick slices. (I use the thin slicing disk on my food processor.) If canning the carrots, put the canning pot on the stove and fill it with enough water to cover the jars when they are added. Cover the pot, and bring to a simmer.

2. Simmer the carrots: Meanwhile, put the carrots, vinegar, water, sugar and 2 tablespoon canning salt in a large saucepan or dutch oven, and bring to a boil. Reduce the heat, and simmer the carrots for 15 minutes. 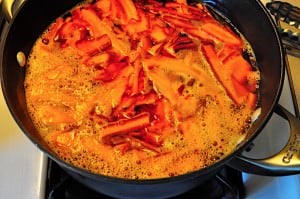 3. Fill the jars: In each pint jar, put ½ a jalapeno pepper, 1 bay leaf, 5 peppercorns, and 1 teaspoon salt. Using a slotted spoon, fill each jar with carrots, leaving ½" of head space at the top of each jar. Ladle enough brine into each jar to cover the carrots, again leaving ½" of head space. If you are doing refrigerator pickles, you're done - cover the jars and skip to the "rest for at least a week" step. If you're canning the pickles, read on...
*This step is where the canning funnel

comes in handy. Spooning hot carrots and ladling hot brine is a mess. The funnel helps get everything into the jars, and not all over the counter top.

4. Process the jars: Wipe the rims of the jars and apply the lids. Lower the jars into the canning pot, and make sure they are covered with 1" of water. Cover the pot with its lid, bring the water to a rolling boil, then process in the hot water bath for 15 minutes. Remove the jars from the pot, and let rest for 12 to 24 hours before testing the seal on the lids.

*This step is where the jar tongs

really come in handy. If you don't have them, wrap a rubber band around the heads of your regular kitchen tongs to give them extra grip, and be very careful.

5. Rest and serve: Let the jars rest for at least a week, two if possible, before using. If the jars were processed in the hot water bath, and sealed properly, they will last at room temperature for a year. Once you open a jar, store it in the refrigerator, and it will be good for a month or two. The same goes for refrigerator pickles - since they weren't processed, they work just like a jar that has been opened: keep them refrigerated for a month or two.

Variations:
*Refrigerator pickles: As I say in the opening, you don't have to go all-in to canning to have good pickles.  Skip the canning steps, and just refrigerate the pickles. If they disappear as quickly as mine have, you'll eat them all before they start to turn bad. If they've been in the refrigerator for over a month, keep an eye on them, and throw them out at the first sign of cloudiness or mold.

Notes:
*I started with just under 2 pounds of carrots, and once I was done trimming, slicing, simmering, and canning, I had three pint jars full. I think 2 ½ pounds should fill four pint jars...but I'm estimating.

*I'm basing this recipe on one from the National Center for Home Food Preservation. I've played around with the spices, but not the proportions of vinegar, salt, sugar and water. Since this is my first foray into canning, I didn't want to go too far afield from the tested recipes. I've read that you can get into trouble that way. And these pickled carrots are very good. I really like them. But...they're not the same pickles I had at the Mexican restaurant. I want to cut back on the sugar. Does anyone know of a pickled carrot recipe, one that's been tested for canning, that doesn't include as much sugar?
*Diane thinks I'm crazy.  She says these are the best pickles I've made.  She may be right; they have a great balance of sweet, hot, and salty. Don't let my search for a different recipe keep you from trying this one!