Today we're going to discuss glutamic acid.
*I know, the excitement never ends here on DadCooksDinner. Please buckle your seat belts, and keep your hands and arms inside the ride until we come to a complete stop.

The September/October issue of Cooks Illustrated published an interesting recipe about beef kebabs, with a marinade that included tomato paste. Why tomato paste? Because, tomato paste is full of glutamic acid, which adds depth to the beef flavor of the kebab. Glutamic acid is the source of "umami", or the potential fifth basic taste of savoriness.

Glutamic acid occurs naturally in a number of foods, including cheese, mushrooms, and soy sauce. This is why I use soy sauce it in my quick marinades - it gives a boost to the savory taste of meat. The author of the CI article, Charles Kelsey, wanted to avoid soy sauce because it has a very distinct flavor.  As he put it, everything winds up tasting like beef teriyaki if you add soy sauce to the marinade. He chose tomato paste as his substitute source of glutamic acid.
*He also included canned beef broth in his marinade, which includes glutamic acid to increase its savory, beefy flavor. I'm not willing to buy canned broth, so I left it out.

The tomato paste does its job well - it gives these kabobs an extra depth, and the tomato goes well with the Mediterranean flavor profile of the rest of the marinade; the combination of onions, garlic, thyme, lemon and tomatoes is classic across much of the region.

Directions:
1. Cut and marinate the sirloin: One hour before cooking, cut the sirloin into 2 inch chunks, and put in a zip-top bag. Drop the garlic cloves into a running food processor, and process until they are finely minced. Cut the onion into large chunks, add to the food processor, and pulse until chopped. Add the lemon zest and juice, water, thyme, vegetable oil, tomato paste, salt and pepper. Run the food processor until you have a smooth paste, about one minute, scraping down the sides once or twice. Pour the marinade over the sirloin chunks, zip the bag closed, then shake and toss to coat the beef with the marinade. Refrigerate for one hour, and up to four hours, turning the bag and tossing after every half an hour.

2. Cut the vegetables:Just before grilling, prepare the vegetables. Remove the core from the red pepper, and cut it into 1 inch chunks. Trim the red onion, remove the skin, then cut it in half. Remove the central "core" of the onion, leaving three or four layers of onion. Cut the remaining layers into eight pieces (cut each half in half lengthwise, then in half again, then cut crosswise.) You should get ¾" to 1" pieces of onion - here's a picture of how the onions should be sliced from Tuesday's zucchini kebab post: 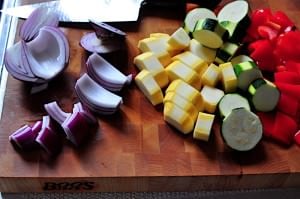 4. Prepare the grill: Set the grill up for cooking with direct medium-high heat. For my Weber Summit, this means preheating the grill for ten to fifteen minutes on high, then brushing off the grill grate and turning the burners down to medium-high.

6. Serve: Let the kebabs rest for 10 minutes, then serve. Each skewer should serve two people; big eaters will probably have an entire skewer for themselves. 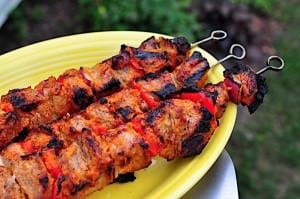 Variations:
*Like the idea of Teriyaki kebabs? Replace the water in the marinade with soy sauce, and cut the salt back to ½ tsp.

Notes:
*This is a brinerade, not a marinade, due to the high proportion of salt added to the marinating liquid. The rest of the ingredients are forming a spice paste for the exterior of the meat, particularly the lemon, thyme, honey, and oil.  But the salt and glutamic acid will penetrate into the meat and flavor it all the way through.

*Oh, and the trade name for glutamic acid, when it is extracted from seaweed and sold as a separate ingredient? MSG. Don't worry - the health effects of MSG are statistically non-existent. If you can handle cheese, mushroom, and tomatoes, then you can handle the level of glutamates in this dish.