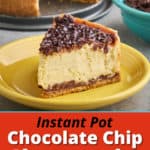 I’ve been noodling around with the idea of a chocolate chip cheesecake, and was scanning Google Images for inspiration. I saw this picture from Nestle with two layers of chocolate chips - one on the top, one on the bottom - and immediately reached for my springform pans.

Now, of course I’m using my Instant Pot. Pressure Cooker Cheesecake is one of my go-to techniques. My pressure cooker cheesecake tricks: 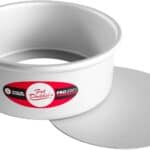