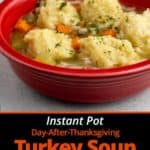 I have a confession: I didn't make this soup the Day After Thanksgiving. I stashed the leftovers from my Christmas turkey in the freezer...and forgot about them. I was googling around for a recipe idea when I stumbled across the idea of mashed potato dumplings. That's when I remembered the frozen turkey bones in my freezer, and the leftover mashed potatoes from Sunday dinner. I loaded up my Instant Pot with frozen turkey bones and I was off to the races.

This is why I beg people to save the bones from roast birds. Leftover turkey, roast chicken, whatever you’ve got - it makes a fantastic pressure cooker broth. After you have broth, the world is your…soup? Yes, the world is your soup.

Where was I? Oh, yes, mashed potato dumplings. I couldn’t pass up using leftover mashed potatoes in turkey soup, or calling it Day-After-Thanksgiving soup. (If I could work stuffing and cranberries in somehow, I would. But that seems a bit too far.) The potato takes the place of the milk, butter, and some of the flour in a traditional dumpling recipe. I don’t know why I haven’t run across potato dumplings before - they’re big in Germany. (And I mean that literally - they look like the size of baseballs.)