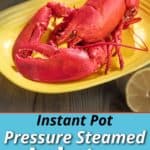 George Mallory, on why to climb Mt. Everest

Steamed lobster? In a pressure cooker? Is that…possible?

I ran across this recipe from my friends at Zavor for pressure cooker steamed lobster, and still didn’t believe it. So, I had to try it myself. And, you know what?

It worked (Of course it worked, or I wouldn’t be writing this recipe.) I was surprised how well it worked. I was worried about overcooked, rubbery lobster - pressure steaming seems aggressive for something this tender - but it came out great.

Now, if I’m cooking a lot of lobsters, I’m pulling my lobster pot out of storage. If I need a lobster or two for use in another recipe? I’m keeping this technique in my back pocket.

If you have an 8-quart or larger pressure cooker, you can cook two, and maybe three lobsters. Don’t add any extra water - the 2 cups generates enough steam for the whole pot, regardless of the number of lobsters. 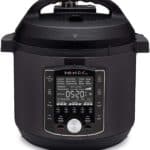 Cooked lobster is not good for long-term storage. Lobster meat, picked from the shell, will last in the refrigerator for a day, maybe two on the outside. If I need to store it longer, I freeze it, where it is good for a few months.