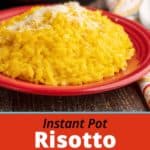 When I say “Italy,” what starch pops into your head? Pasta, of course. But, as I found out on my trip to Venice, Italy is much more diverse than the “pizza, pasta, and meatballs” I grew up with. Northern Italy is all about rice. Milan, in Northwest Italy, is famous for fashion - it’s from Milan, dahling - and for bright yellow Risotto alla Milanese, rice colored with a pinch of saffron, the world’s most expensive spice.

Saffron is made of the stigmas of the saffron crocus flower, three tiny threads in the center of the bulb. These threads must be harvested by hand, and roughly 5,000 flowers yield one ounce of dried saffron threads. The half-gram jar of Saffron I bought for this recipe cost $10.

How did Milan become famous for saffron risotto? Well, there’s a great story:

The legend of Risotto alla Milanese

In the 1600s, Mastro Valerio of Flanders led a team of workmen, creating stained glass windows for the cathedral of Milan. Valerio nicknamed one of his workers “Saffron” because he added a pinch of saffron to the pigments used to color the stained glass. After years of this nickname, Saffron got even. At Valerio’s daughter’s wedding, he convinced the chef to add a little saffron to the risotto. The wedding party thought the mound of bright yellow risotto was a joke - and they were right. But they tried it anyhow, and rice was a hit. The idea spread, and risotto “alla Milanese” was born.

Is this legend true? Probably not - saffron has been used in cooking throughout Eurasia for centuries; nearby Spain uses it in paella, and Bouillabaisse a la Marseillaise demands it. But it’s such a great story. I had to share.

Now, on to cooking the risotto. Of course I’m using my Instant Pot - pressure cooker risotto was one of the first “killer recipes” I learned when I got my stovetop PC years ago. No carefully stirring in ladles of broth - cooking under pressure releases the starch in the rice, thickening up the dish nicely. And quickly, of course - it’s done with only five minutes under pressure.

You can skip the saffron. It is eye-wateringly expensive. It won’t be authentic Risotto alla Milanese without saffron, but it will still be a good, simple risotto.

Arborio rice is my default for risottos, because it is the easiest one to find at my local grocery stores. I prefer Carnaroli rice for pressure cooker risotto, when I can find it. It stands up to cooking a little better than Arborio or Vialone Nano, and I don’t mind having a little extra cushion when I’m pressure cooking.

If you use store-bought broth, watch out for “regular” chicken broth – it’s loaded with salt. If you can’t find low-sodium chicken broth, use water.

But, please, try homemade chicken broth. If you have an Instant Pot, you will love it.

This recipe can be vegetarian if you are OK with butter and cheese; use vegetable broth instead of the chicken broth. (And, again, if you're using store-bought broth, try to find low sodium broth.)

Osso Bucco is the traditional Milanese main dish to serve with Risotto alla Milanese - check out the recipe below.

According to the USDA, Leftover risotto is good for up to three days in the refrigerator, or three months in the freezer, as long as it is refrigerated (or frozen) within an hour of cooking. (I portion out my rice in 2-cup containers before I put it in the fridge or freezer.) Also, be sure to reheat the rice all the way through - to be precise, an instant read thermometer should read 165°F in the middle of the rice.