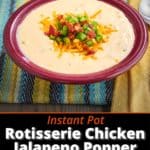 My local coffee shop had Chicken Jalapeño Popper Soup as their featured soup of the month. What a great idea. I have to make that!

Their ingredient list was: Bacon, jalapeño, green pepper, chicken, cream, Monterey jack, sharp cheddar, cream cheese, and “spices”. So, I got to work…and did some Googling. Turns out, that’s a pretty standard ingredient list. Time to break out my Rotisserie Chicken broth technique and get to work.

The only real trick seemed to be from the Jalapeño Popper Chicken Soup recipe at Better Homes & Gardens, where they recommend whisking the cream cheese with a little of the broth to make sure it is completely smooth before adding it to the soup. This is a much creamier soup than my typical Rotisserie Chicken soups - between the flour, half-and-half, and 3 melted cheeses, it very, VERY rich.

If you have a leftover roast chicken carcass, substitute it for the rotisserie chicken. Pick as much meat off the bones as you can, then pressure cook the broth with the bones and any skin or clinging meat that’s left.

If you already have chicken broth (from, say, a batch of Chicken Back Broth) you can skip the chicken. Jalapeño popper soup on its own is quite good. I cook a little extra bacon to make up for the missing chicken, but you don’t have to.

You can substitute leftover chicken and store-bought low sodium chicken broth - but please, try making pressure cooker broth at some point. You’ll be surprised by how much better it tastes.

The onion, carrot, celery, and bay leaf in the broth are my favorite mix of aromatics, but you don’t have to have all of them. You can skip any of them, or substitute more of the ones you have. If you like garlic, adding or substitute a couple of unpeeled cloves of garlic for the onion is a great addition.

You can make this a vegetarian soup by substituting vegetable broth for the chicken broth, and skipping the chicken and bacon. (Unfortunately, it can’t be vegan. The cream and cheese are too important to substitute.)

The bacon is optional, but traditional in jalapeño poppers, and it adds a nice crunch to the soup.

If you don’t have green onions, you can substitute a diced yellow or white onion. The garlic is optional.

If you don’t like it hot, substitute two more green bell peppers for the jalapeños. (But why are you making Jalapeño Popper Soup if you don’t like the heat?) If you like it extra hot, add a half teaspoon of cayenne pepper with the flour to kick up the heat.

The flour and half and half add extra creaminess to the recipe. You can skip them, or substitute more broth for the half and half, but this is supposed to be a cream soup, so I don’t recommend it.

The mix of cream cheese, Monterrey jack, and cheddar are what stuff a regular jalapeño popper, so they’re what I include in the soup. Cream cheese adds its tang and smoothness, Monterey Jack acts as a thick melting cheese, and cheddar has the flavor, so I try to get all of them for this soup. If you’re missing any of them, just substitute an equal amount of the others.

This recipe makes extra broth on purpose - there is enough for a second batch of soup. I freeze any broth I’m not going to use immediately in 2-cup and 4-cup containers, usually canning jars. Frozen broth keeps for up to 6 months.

The broth can be made ahead before making the soup - refrigerate or freeze the broth and the chicken breasts - and then start the recipe with the “cook the bacon” step when you are ready.

This soup, like most cream soups, doesn’t store as well as a typical broth-based soup. You can refrigerate it in 2-cup containers for a couple of days, or freeze for up to six months, but the fat in the cream may separate and float to the top. It will still taste fine, but needs a good whisking to bring the soup and fat back together.