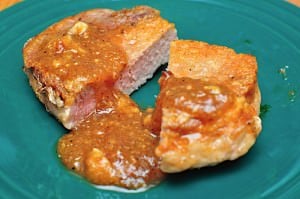 This is an improvised weeknight recipe.  I made it for dinner last week, and it turned out so well I had to share it.

The idea came while I was staring into my refrigerator, trying to figure out how to use up a bunch of ingredients I had lying around. First were the pork chops cut from the shoulder end of the loin I used in last week's rotisserie stuffed pork loin. That got me thinking about a pork chop saute. I also had some apple cider left from the brine, and apple butter from my trip to the orchard. These became the base for my pan sauce. Fifteen minutes later, dinner was ready!

This recipe is a grown up version of a childhood favorite, pork chops with applesauce.* The pan sauce is full of apples and cinnamon, with a hint of heat from the grainy mustard. It's hard to go wrong with pork and apples, a classic flavor combination.
*Even though it is a grown up version, it went over well with the kids.

Inspired By: Pam Anderson How to Cook Without a Book

Directions:
*For an overview, see my Saute with Pan Sauce basic technique
1. Prepare the Sauce: Mince the garlic, and set aside. Combine the apple cider, apple butter, and grainy mustard in a small bowl, and stir until evenly mixed.

2. Prepare the Pork: Sprinkle the salt and pepper evenly over the pork chops. Put the flour in a shallow pan, and coat the pork chops with a thin layer of flour, shaking to remove any excess. 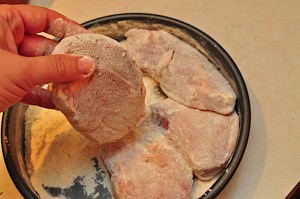 3. Prepare the pan: Heat the butter and olive oil in the fry pan over medium-high heat, until the butter has stopped foaming and is just starting to turn brown.

5. Make the Pan Sauce: Pour off any leftover oil, turn the heat down to medium, and add the minced garlic to the pan. Cook for 30 seconds to 1 minute, or until just softened, then add the sauce mixture. Cook, scraping the bottom of the pan until all the browned bits of pork are loose in the sauce, and the sauce has thickened, about 2 minutes. Taste the sauce, and add salt and pepper until it is well seasoned.

6. Serve: Serve each pork chop with 1 teaspoon of sauce drizzled on top, and pass the rest of the sauce at the table. 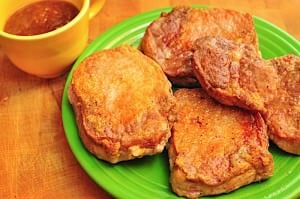 Variations:
*Sautes work with any thin cut of lean meat. With the sweet apple flavor in this pan sauce, I wouldn't use beef, but this sauce is great with chicken breasts or turkey cutlets.

*I like the subtle hit of heat that the grainy mustard adds to the sauce. If you want to tone it down some, use Dijon or brown mustard instead of the whole grain mustard.

*Pork chops with a pan sauce has an almost infinite set of variations. Check out my other sautes with pan sauces for ideas of different pan sauces you can use.

*As I said in the saute basic technique, don't crowd your pan! You'll get steaming, not browning, and the crisp crust on the pork is the best part of this recipe.

*Cooking for a crowd, and want to double the recipe? (Like, say, five people, like I am?) Cook the pork in two batches, adding another tablespoon of oil and butter to the pan between batches.

Inspired by:
Pam Anderson How to Cook Without a Book