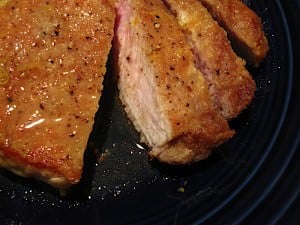 Let's put the saute with pan sauce technique to use again. Different meat, different sauce…but it's really the same thing, behind the curtain.
*This was the second recipe I thought of when All-Clad asked me to test their d5 pan.

I've complained before about how boring boneless pork loin can be. This recipe takes care of that with a crispy exterior and a flavorful pan sauce.

The pan sauce is an example of why I keep going on and on about making your own stock. I freeze it in 1 cup containers for use as the base of pan sauces. Homemade stock gives you a depth of flavor and a richness from gelatin that canned just can't match. Stock makes a simple pan sauce into something sublime.
*Of course, Michael Ruhlman says that if I would just make veal stock, it could be even better. He's probably right. But I roast a chicken every few weeks. Chicken stock uses the bones and scraps to make something delicious.

Directions:
*For an overview, see my Saute with Pan Sauce basic technique
1. Prepare the Sauce: Mince the shallot, and set aside. Juice and zest the orange into a small bowl. Add the chicken stock and dijon mustard to the bowl, whisk to combine, then set aside. 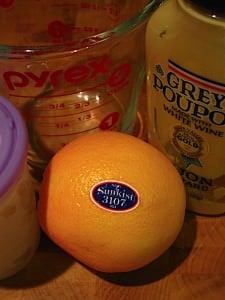 2. Prepare the Pork: Sprinkle the salt and pepper evenly over the pork chops. Put the flour in a shallow pan, and coat the pork chops with a thin layer of flour, shaking to remove any excess. 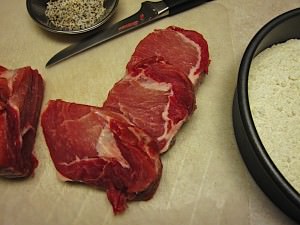 3. Prepare the pan: Heat the butter and olive oil in your pan over medium-high heat, until the butter has stopped foaming and is just starting to turn brown.

5. Make the Pan Sauce: Turn the heat down to medium, and add the minced shallot. Cook for 30 seconds to 1 minute, or until just softened, then add the orange juice - stock mixture. Increase the heat to high, and scrape the bottom of the pan until all the browned bits of pork are loose in the sauce. Boil until reduced by half, about 4 minutes. Turn off the heat, and whisk in the butter. Taste the sauce, and add salt and pepper until it is well seasoned. 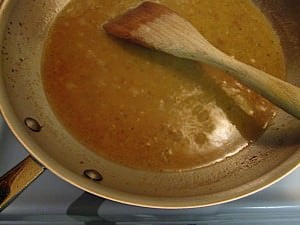 6. Serve: Serve each pork chop with 1 teaspoon of sauce drizzled on top, and pass the rest of the sauce at the table. 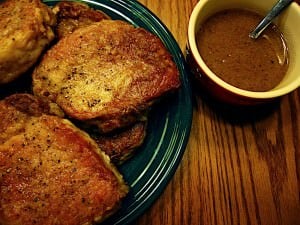 *Other citrus: Replace the orange with a lemon, or a couple of limes. When tasting the sauce for seasoning, add up to a teaspoon of sugarif it needs a hit of sweetness.

Notes:
*Serve with roasted new potatoes and a salad or a sauteed vegetable.

*I prefer to buy a whole pork loin, and cut it into chops myself. When I buy pre-cut chops, they tend to be uneven in thickness, and a little too thin. It only takes a couple more minutes to cut them myself, and it is usually less expensive, because pork loin roasts tend to be cheaper than pork chops at my local grocery store.

*As I said in the basic technique, don't crowd your pan!  You'll get steaming, not browning, and the crisp breaded crust on the pork is the best part of this recipe.

*Cooking for a crowd, and want to double the recipe? (Like, say, five people, like I am?) Cook the pork in two batches, adding another tablespoon of oil and butter to the pan between batches. This is something I do so often that I should really make it part of the basic technique. Try to put the meat over the parts of the pan that have dark brown fond on them, to keep it from burning. I usually wind up turning the pan down to medium on the last turn of the second batch to keep the fond from getting too dark. Someday, when the kids are older, I think I'll have to buy another 12 inch fry pan...

Adapted from:
Pam Anderson How to Cook Without a Book