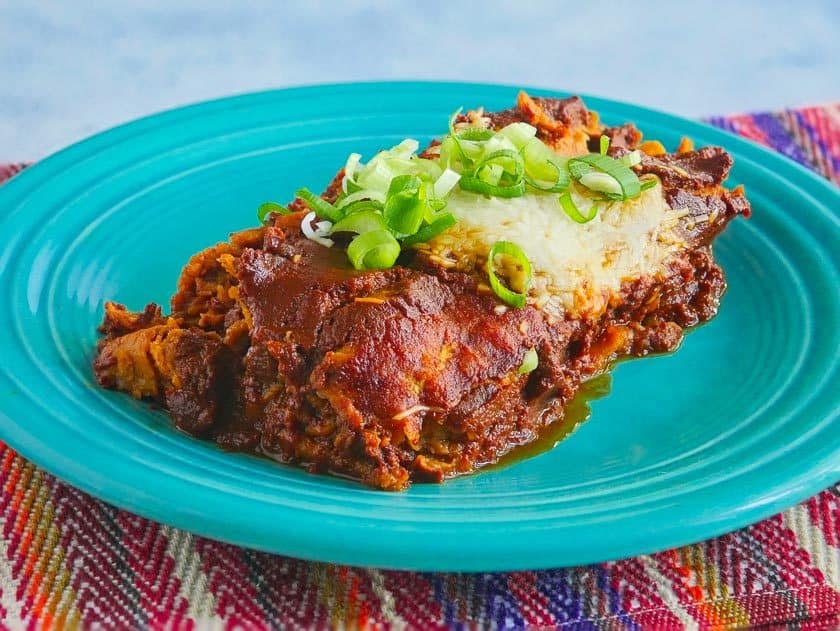 It started with my brother Pat’s brisket. He did a real barbecued packer brisket, 12+ pounds, low and slow for 18 hours. He knew we wouldn’t finish it in one sitting…we’re carnivores, but that’s a lot of beef, even for us. His plan for the leftovers was almost as good as the original brisket – beef brisket enchiladas.

I came home from vacation, opened up the freezer, and saw the brisket I bought back in May. Sigh. I had plans for it, a lazy weekend, multi-day, low and slow barbecue. And then life intervened. Suddenly, it’s August, the kids are back in school, and I need to free up space in the freezer. Time to get to work.

I trim the brisket, save the point for another meal, and cut the flat into cubes so it will cook quicker. Instead of store-bought Enchilada sauce, I toss dried peppers, an onion, and some garlic in the pot. They’re the base of my homemade enchilada sauce. They soften up in the long cooking time, and then I blend them up with tomatoes and some defatted pot liquid.
(If dried peppers are a step too far, you can use store-bought enchilada sauce – see the recipe notes. In fact, if you have a couple of pounds of leftover beef from my pressure cooker barbecued brisket, you can use canned enchilada sauce and skip to step 5 – shred the beef.)

Most pressure cooker recipes are quick…but not this one. Enchiladas are a multi-step process. Cooking the brisket, shredding the beef, rolling the enchiladas, and baking – it takes a couple of hours, end to end. Now, a lot of that is free time, because there’s not much to do while the pressure cooker is cooking, or while the enchiladas are baking. The pressure cooker does what it does best – compress time, and cook the brisket in about an hour. (Not that there’s anything wrong with low and slow barbecued brisket – but sometimes you don’t have a whole weekend to dedicate to a cooking project.) My only request: don’t try this recipe on a busy weeknight – make tacos instead.