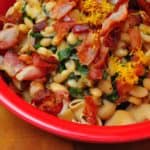 Here is my five dollar challenge meal. I fed my family of five for $16.24, with enough leftovers for a couple of lunches later in the week.

The only problem? The kids didn't like the green stuff - the Swiss chard. They gobbled down the bacon, then picked at the beans and pasta around the chard leaves.
*Someday my kids will love vegetables. This is like saying: someday the sun is going to burn out and become a dwarf star. Sure, it's going to happen, but I'm doubt I'll be around to see it.

Why cook a five dollar challenge meal in an expensive pressure cooker?

If you can’t find Cannellini beans, you can substitute great northern beans.

To make this a vegetarian recipe, skip the bacon. There’s enough going on that you won’t miss it.

Bacon is kind of cheating with this recipe; diced pancetta would be more authentic - but back when I wrote this recipe, it was harder to find in my local grocery stores.

Swiss chard is a tender, leafy green. Baby spinach is a good substitute.

You can substitute a teaspoon of dried Italian seasoning for the Rosemary sprig.

I get the “to soak, or not to soak?” question all the the time. I soaked my beans in this recipe, to brine them and get some salt into them. But you don't have to- they will cook to tenderness with 35 minutes at high pressure.

Leftovers: This recipe freezes well, in 2-cup containers, for up to 6 months. Put a layer of pasta in the bottom of the container, then top it with the beans, chard, and bacon.